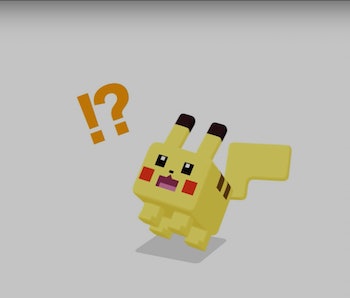 The Pokémon Company unveiled a new game on Tuesday, and it’s already available for play. Pokémon Quest was revealed at the company’s 2018 press conference in Tokyo and went live on the Nintendo eShop for Switch players. Mobile versions of the game are projected to come in June.

It’s a little unusual for a Pokémon game, so here’s everything you need to know.

Trainers are sent to Tumblecube Island, a new region filled with curiously cube-shaped wild Pokémon called Pokéxels. Fans of Minecraft will immediately recognize the blocky look, and the comparisons don’t just end there, because you can actually build bases.

These base camps are how trainers add new Pokémon to their stables. Rather than fighting feral Pokémon and chucking a Pokéball, Pokémon Quest has you winning them over with food, and the Pokémon are picky. Not every Pokémon likes the same chow, so you’ll need to use a diverse array of recipes to attract different species.

A quick hint: Go by color and texture! If you want to attract a Pikachu, make a dish using ingredients that are yellow and soft. Pikachu can’t get enough of yellow curry.

It’s All About the Crafting

Combat in Pokémon Quest is a little weird and could be frustrating to some players. It’s real-time rather than turn-based, but you also don’t have much direct control over your Pokémon. Moves and techniques are restricted by a regenerating energy meter.

The real draw of the game is the crafting. If that wasn’t already obvious from the Pokémon essentially being transmuted into Minecraft NPCs, the most in-depth mechanics in Pokémon Quest focus on the base-building, the recipes, and the leveling items.

Your Pokémon level up using conventional means like good old-fashioned fighting, but the game also has Power Stones which confer different buffs onto your Pokémon.

You can earn Power Stones through completing stages with your Pokémon but you can also buy them using the in-game currency, PM Tickets.

There are also DLC packs which provide special items that buff your gains.

If this quirky new title sounds like something up your alley, there’s also a helpful starter guide on the official website. I hope you make a mean yellow curry.