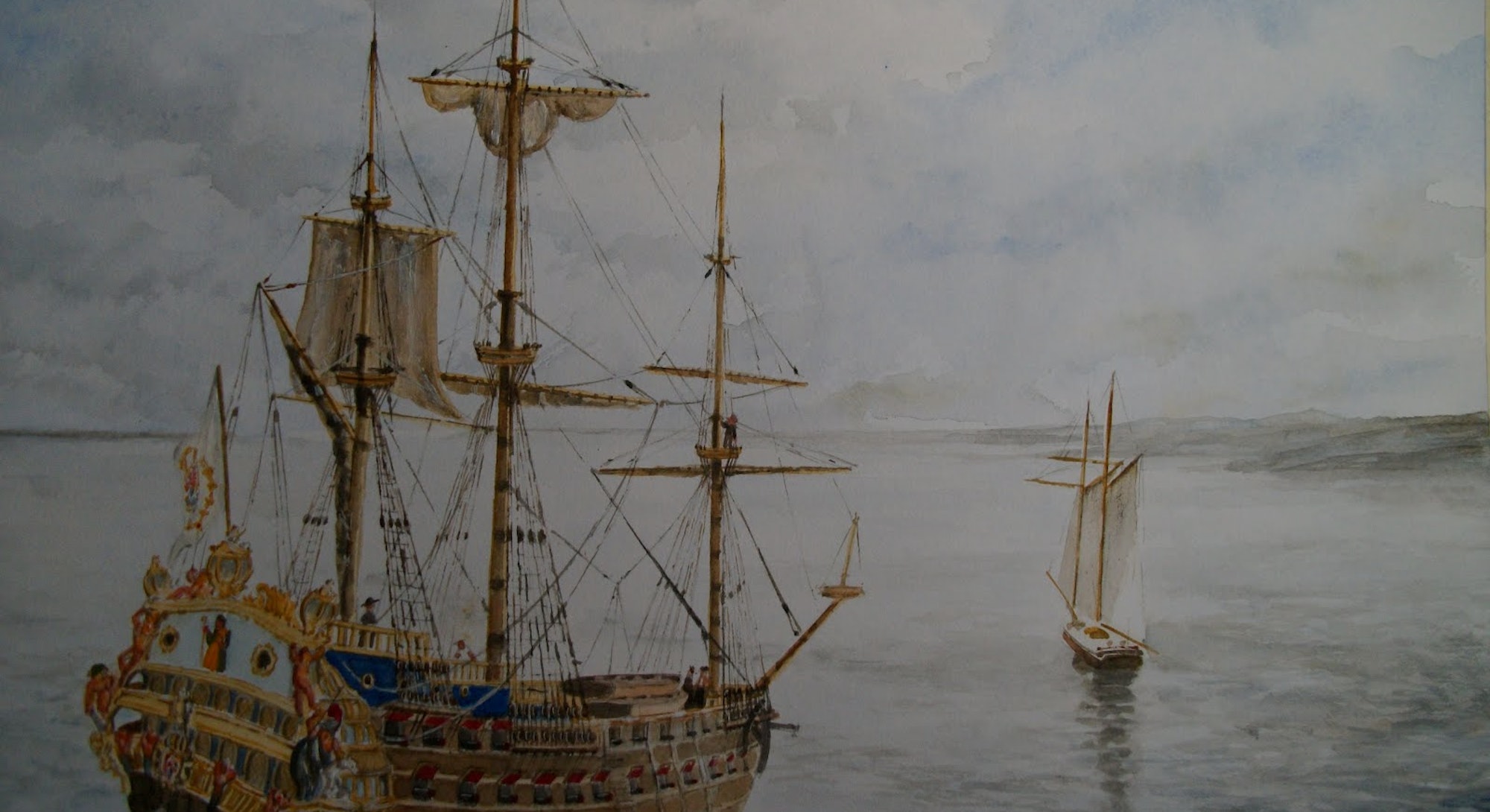 The REMUS 6000 looks a little like a torpedo on steroids. It’s 12 feet long and runs on a lithium-ion battery that can keep it on underwater missions for up to 12 hours.

The robotic submarine — REMUS is short for “Remote Environmental Monitoring UnitS” — is primarily used for ocean mapping and surveying, but it’s been used to scout for ocean mines during wartime as well. A quote attributed to U.S. Navy officials on the website for the Woods Hole Oceanographic Institution, which developed the autonomous submarine, offers this colorful description for the REMUS 6000, which can do the work of more than a doze human divers: It is “undeterred by cold temperatures, murky water, sharks, or hunger.”

All this makes the REMUS 6000 the perfect tool to find sunken treasure.

The Explosion of the San José during Wager’s Action. Oil on canvas by Samuel Scott.

The San José boasted 62 bronze bronze cannons, had three masts, weighed 1,200 tons, and was just one ship in a treasure fleet for the Spanish Navy, when it set sail for the first time in 1698. It could carry hundreds of people and enough riches (from the mines in Potosi, Peru) for a small country. It’s not something you’d want at the bottom of the ocean. And yet that’s where it ended up.

Ten years later, on June 8, 1708, it engaged in a battle with a British ship off the coast of present-day Colombia, near the Rosario Islands, on a trip from Panama to Colombia.

The fight would later be named “Wager’s Action,” after the British Naval captain Charles Wager, whose squadron was based to the north in Jamaica. The Brits were after the riches on the Spanish ships, which would fund Spain and France’s effort in the coming War of Spanish Succession against the British, among other countries.

The battle began around 3 p.m. with the San José in the center of a three-ship formation. The first shots were fired around 5 p.m. and at 7:30 p.m., the San José explodes and sinks, with only 11 people surviving the explosion and subsequent sinking.

With 600 people onboard and somewhere between $1 billion and $17 billion worth of gold, silver, and emeralds, it was in no shape for battle, and during battle, gunpowder onboard exploded, sinking the ship, its treasure, and the people onboard.

New details released this week confirm what the world first found out in late November 2015, thanks to dolphins. Not literal dolphins, but a design element on the ship. Here’s how it happened:

REMUS descended to just 30 feet above the wreck where it was able to capture photos of a key distinguishing feature of the San José — its cannons. Subsequent missions at lower altitudes showed engraved dolphins on the unique bronze cannons.

“The wreck was partially sediment-covered, but with the camera images from the lower altitude missions, we were able to see new details in the wreckage and the resolution was good enough to make out the decorative carving on the cannons,” said WHOI engineer and expedition leader Mike Purcell. “MAC’s lead marine archaeologist, Roger Dooley, interpreted the images and confirmed that the San José had finally been found.”

It’s an interesting question, but for now, Colombia is most loudly claiming the San José, and it certainly has proximity on its side. Last month, President Juan Manuel Santos posted this message on Twitter: “The galleon San José, sunk in national waters, is one of the great finds of the history. With the law of Cultural heritage immersed we can recover it.” The tweet included the hashtag, “#NuestraCulturaElMejorLegado,” which translates to “Our Culture, the Best Legacy,” the official tag line for the country’s Ministry of Culture.

Meanwhile, Sea Search Armada, a group based in Washington State, claims it discovered the San Jose in 1981 and has been litigating with the Colombian government for years over rights to the treasure on the ocean floor.

Jack Harbeston, CEO of Search Search Armada, says in a short documentary about his group’s effort to recover the sunken treasure that Sea Search struck a deal struck with the Colombian government, but it has since been ignored. More images of the wreckage have surfaced, thanks to better technology, and that has caused Colobmia the deal, the group alleges. It has even posted a chronology of litigation with the government.

The dolphins were spotted by submarine cameras for Sea Search Armada, too. But the rub comes from the fact that the Sea Search Armada says its owed half of whatever is recovered from the San Jose wreckage. The agreement from the decades ago has seemingly been abandoned. Sea Search Armada puts it in black and white terms: “The Colombian government illegally changed their deal with Sea Search Armada, now maintaining that they would get 95 percent of the salvage proceeds.”

And finally, the government of Spain, the home country of that sunken ship, is on the record as being very interested in the wreckage. The Guardian reported on Spanish interest this way in late 2015, after the the discovery was first announced:

The Spanish government is considering whether to stake a claim. The Spanish culture secretary, José María Lasalle, speaking in Havana on Saturday, reminded Colombia of Spain’s “clear position” in defense of its “sunken wealth”. He said Spain was examining the information provided by Colombia before deciding “what action to take in defense of what we consider to be our sunken wealth and in accordance with Unesco agreements that our country signed up to years ago.”

With Colombia appearing to be the most likely to recover the wreckage, the United Nations Educational, Scientific and Cultural Organization — the group that designates World Heritage sites — urged Colombia not to sell it off to the highest bidder. This document encourages the country to “take all necessary measures to protect the shipwreck of the San José by applying the best scientific standards.”

It’s likely up to the Colombian government, according to the WHOI.

The Colombian government plans to build a museum and world-class conservation laboratory to preserve and publicly display the wreck’s contents, including cannons, ceramics, and other artifacts.