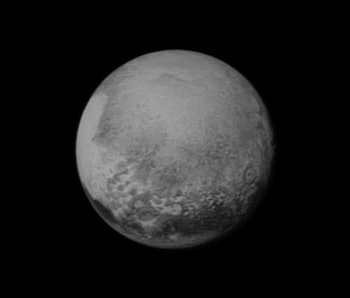 Way back on January 19, 2006, NASA sent out a a probe called New Horizons to take photos of our solar system. The mission is nearly complete because, tomorrow, we are finally going to get real high-definition photos of our favorite (sorta) planet: Pluto.

Well, Pluto. More specifically, New Horizons will come within 7,750 miles of Pluto – closer than its five moons. Our moon is about 238,900 miles away from Earth and we see that thing every night. New Horizons is getting really, really close to Pluto.

New Horizons is going to take photos as best as it can, but, as Vox explains, it will be moving so fast (31,000 miles per hour) that it will make its way across Pluto’s diameter in just a few minutes. We also won’t get the photos until the day after tomorrow because Pluto is so far away, but that shouldn’t temper any excitement because we get to see Pluto!

The exact moment New Horizons will be closest to Pluto is 7:49 a.m. Eastern Standard Time. Set your alarms. (But then wait for a day.)

New Horizons won’t resolve the “Is Pluto a planet?” debate. It’s pretty moot at this point: It’s not. What it will do, as Vox explains once again, is tell us more about our solar system and Earth. Pluto began its existence much closer to the sun before being flung out far away. But, as Alan Stern, the mission’s principal investigator told Vox, “We know that the Earth went through the stage of growth that Pluto stopped at. This will help us connect the dots” [about our own planet’s nascent development.]

As the above Vox video explains, radio waves will send back the photos for us to see. And as for how New Horizons got there, it ran out of gas a while ago but has been making its way through space with momentum, mainly from a boost from Saturn’s gravity in 2007. It can’t slow down because it can’t speed back up.

And Space.com lays out, New Horizons is powered by a radioisotope thermoelectric generator, which releases energy through nuclear decay. It’s similar to the generators used by astronauts on the moon.

Enjoy the once-in-a-lifetime moment tomorrow where we encounter a completely unseen planet-like object. It’s something we’ve known about all our lives, but really we knew close to nothing at all. Check back in January 2019, when New Horizons reaches PT1 (described as a “small, likely lumpy object”) before leaving the solar system.

More like this
Science
10 hours ago
Venus is trapped in a ruinous cycle of volcano events — why is Earth spared?
By Evan Gough and Universe Today
Science
5 hours ago
Artemis I vs. Artemis II: How the NASA program will build off the successes of the first mission
By Doris Elín Urrutia
Science
44 minutes ago
Astronomers spot an incoming small asteroid — and make a big breakthrough
By Andy Tomaswick and Universe Today
Related Tags
Share: