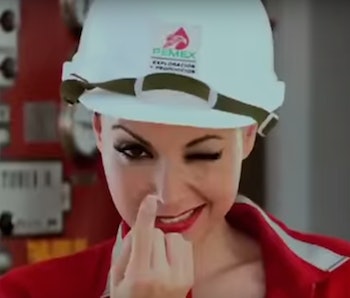 Say you’re an international oil company with a heinous worker fatality rate. How do you protect your crews? Mexico’s Pemex answered that question with a $44 million investment into 18 of the most bugfuck-loony training videos ever committed to screen.

A Reuters investigation found the films, which combine the special effects budget of a SyFy original movie with a simmering romance and intrigue not often associated with oil rig workers.

The films are hilarious as terrible movies but criminally negligent as training videos. And if you’re Pemex, who in 2013 racked up injuries and fatality at a rate six times the international average, that’s something you should give a shit about. In the company’s defense, Pemex says workers need a spicy plot and a girl in a bikini to pay attention. A polite response to that would be that they might be surprised if they gave them more credit.

You can watch a trailer for Pemex’s productions here. And if it wets your appetite for international cinema, check out the collection at Reuters. A Story of Oil Workers really is the Bicycle Thieves of blue-collar training videos.

More like this
Science
8.5.2022 1:00 PM
The most miraculous sci-fi movie on Netflix reveals a scientific debate over aging
By Tara Yarlagadda
Entertainment
1 hour ago
The one incredible Marvel movie you need to watch before She-Hulk
By Dais Johnston
Entertainment
8.6.2022 1:00 PM
Static Shock live-action movie is "still in development," Denys Cowan says
By Eric Francisco
Related Tags
Share: