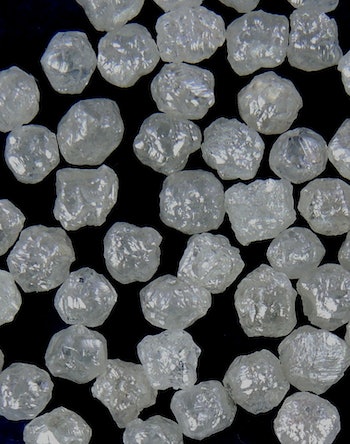 You may not remember much from high school chemistry, but you probably recall learning the fundamental lesson that carbon, the quintessential element of life, can form four bonds with other molecules. Carbon’s four bonds are responsible for the structure of diamonds, methane, and alcohol, to name a few. Recently, however, a high school teenager from Oklahoma rebelled against this doctrine. Carbon, he reports in a new paper he co-wrote with his high school teacher, published in the Journal of Molecular Modeling on Thursday, can form more bonds than anyone ever thought.

The era of four is over, and the death knell sounds from one of the country’s worst states when it comes to support and funding for public education.

This unprecedented discovery came about because George Wang, a senior at the Oklahoma School of Science and Mathematics in Oklahoma City, did his homework. His chemistry professor, Dr. A.K. Fazlur Rahman, was lecturing about carbon’s standard four bonds when he introduced a paper, published in 2016 by German scientists, that showed that carbon could in very specific situations make six. “I asked the students, is it possible that it can make more than six?” Rahman, an organic chemist by training, tells Inverse. Wang took up the challenge, showing that carbon can make not only six but, stunningly, seven bonds. “I said, ‘Interesting, but I need to see your calculations,’” says Rahman. Those calculations are now published in a peer-reviewed international chemistry journal.

Wang tells Inverse over the phone from the National Science Bowl in Washington, D.C. that he’d already learned how to use the VASP atom modeling method to do this sort of experimentation, thanks to the help of online user guides and a mentor at a nearby university. Described as “pretty much a self-learner” by his teacher, Wang explains his talent modestly: “I’ve been into chemistry since elementary school, when I read a bunch of chemistry books.”

The reason we think of carbon as “tetravalent” — having the ability to make four bonds — is because, by its nature, it has four loose electrons in its outer shell, floating around its nucleus. According to chemistry’s fundamental “octet rule,” atoms need eight electrons in their outer shells to render them happy and stable. One way an atom can fulfill that rule is by pairing its free electrons with those from some other atom. So, if each of the four free electrons in carbon does that, it winds up with four bonds — and a stable eight electrons. The theory of carbon’s “tetravalent” nature is a pillar of organic chemistry.

But there are exceptions. Sometimes, a “hypercarbon” occurs, characterized by its ability to bond more than the usual four atoms. It was shown to sometimes form five bonds in the 1950s and six bonds by the German team in 2016 under certain circumstances.

Now, Wang and Rahman, together with University of Oklahoma chemist Bin Wang, Ph.D., show in the new paper that it’s possible to for carbon to form an unheard-of seven bonds when it’s in the “tropylium trication” form. More than just fascinating anomalies to age-old chemical rules, hypercarbons like this one have “potential applications in chemical synthesis and in hydrogen storage,” Wang and co-authors write in the paper.

His discovery is remarkable for a number of reasons. There’s the fact that it was made by a high school junior. There’s the oddly similar story that occurred earlier in the history of carbon chemistry, when a 22-year-old named Jacobus Henricus van’t Hoff, Jr. showed in 1874 that carbon was not planar but rather a three-dimensional molecule, changing the course of organic chemistry and later earning the first Nobel Prize in Chemistry.

This achievement is extraordinary for an entirely different reason, too: Wang is a student in a state that consistently ranks among America’s lowest in terms of education, ranking forty-sixth in 2018.

The Oklahoma School of Science and Mathematics, where half the graduates go on to get doctorate degrees and medals from national science competitions abound, is a rarity in a state that is notoriously stingy with funding for education. Oklahoma’s largest teacher’s union just ended a massive nine-day walkout in mid-April, meant to protest dismally low wages resulting from lawmakers favoring the oil and gas industry over education. “We have congressmen, senators, who don’t believe in science,” says Rahman, emphasizing that Wang’s story underscores the need for more educational funding across the state. “It’s not only sad, it’s disturbing.”

Buoyed by the success and encouragement of his students, Rahman still believes there are many Oklahomans with a sincere appreciation of education and science, but he can’t help but point out that “the people who make decisions — they believe in Creationism and all those kinds of things.”

Wang is already hard at work on an organic synthesis problem — another riddle posed to him by Rahman — that should keep his brain occupied until he starts college later this year. He’s been accepted to Stanford University for the 2018 fall semester, where he hopes to study chemistry.