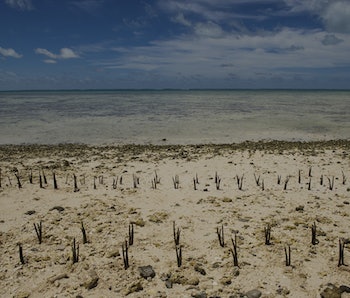 If Michael Lewis were to write a book about climate change, he’d struggle to find the sort of statistic-driven zaggers he loves. The number that have defined the debate about the environment and helped scientists and governments measure charge are not — in baseball parlance — advanced. They are, however, harrowing.

In order to better communicate what climate change needs, we’re going to have to find an ecological equivalent to on-base percentage (OBP) or walks and hits per innings pitched (WHIP). Before you can have the debate, you’ve got to define it.

Here’s how to talk about the climate using numbers.

Carbon Dioxide in the Atmosphere

Researchers at the National Oceanic and Atmospheric Administration’s Mauna Loa Observatory have been measuring carbon dioxide parts per million since 1958. The resultant increase has come to be known as the Keeling Curve, which, spoiler alert, swings up. Passing 400 ppm occurred in March. We’re still here, obviously, but CO2 continues to pile up. Next stop? 450, which comes with a 50 percent chance of increasing the Earth’s temperature by 3.6 F. Here’s Michael Gunson, a climatologist at NASA’s Jet Propulsion Laboratory, back when we hit 400 ppm:

Passing the 400 mark reminds me that we are on an inexorable march to 450 ppm and much higher levels. These were the targets for ‘stabilization’ suggested not too long ago. The world is quickening the rate of accumulation of CO2, and has shown no signs of slowing this down. It should be a psychological tripwire for everyone.

Six million people in the U.S. make their homes 5 feet above sea level — and by 2050, argues a projection by researchers at Climate Central, that’s just where the future storms will surge, leading to widespread coastal flooding.

Warm oceans are munching away ice in Western Antarctica, and the pace is faster than climate scientists had predicted. The Scripps Institution of Oceanography at the University of California, San Diego found that the rate Antarctic ice melted had increased by 70 percent in the decade leading up to 2014 — and there’s a huge amount of ice waiting to fall into the sea if the melt rate keeps accelerating.

Number to watch: 70 percent of all species.

Mass extinction events occur when the rate of speciation (new species arising) is outstripped by that of extinction. In the previous big five extinction events, that translates to roughly [70 percent of species](http://www.washingtonpost.com/blogs/wonkblog/wp/2014/02/11/there-have-been-five-mass-extinctions-in-earths-history-now-were-facing-a-sixth/ going extinct. We’re not there yet — but we’re not great, either. The current rate puts us at about 1,000 times faster than the last 60 million years; for every million species, say Brown University scientists, about 100 are going extinct. That’s coming at us, fast.