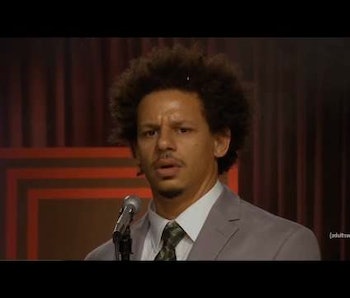 The latest meme is helping the internet identify the real culprit for humanity’s many problems. “Who Killed Hannibal” is the latest backdrop for Reddit users to unpack who caused history’s ills.

The meme consists of two images from the The Eric Andre Show, a late night comedy on Cartoon Network’s Adult Swim that parodies public access television. Although the original scene aired in November 2013, the scene rose in popularity in April after it was reappropriated to make a “who did 9/11?” joke on the “dank memes” subreddit. It has now spread across Reddit to highlight victim-blaming by institutions to justify problematic behavior.

In the 2013 episode, Andre is discussing climate change when he pauses and says, “Speaking of climate change, when is Hannibal Buress gonna start thinking about some underwear, am I right, ladies?” He then pulls out a gun and shoots Buress, his co-host. Seconds later, Andre looks up at the audience, baffled, and whispers, “Who killed Hannibal?”

Redditors are now using the scene to describe scenarios where someone does something cruel and then blames it on someone else, often times the victim in the background, played by Buress. Some versions are lighthearted political commentary, where baby boomers (represented by Andre’s role) are shown shooting America and then wondering why millennials would do that. The meme also explores current political ideologies, especially in the U.S. and U.K., and makes a point to go after Brexit.

Thanks to the “History Memes” subreddit, the meme is becoming widely known for its retrospective versions, especially when discussing World War II and the American Revolution.

Like any good political meme on Reddit, there are already several versions dedicated to the U.S. and Russia.

“Who Killed Hannibal” continues to go viral thanks to being an easy template for political commentary. So long as there is an institution willing to play the blame game, there will be an image of Eric Andre wondering who shot Hannibal.

More like this
Entertainment
20 hours ago
Rick and Morty Season 7 Needs to Steal the Best Doctor Who Trick
By Corey Plante
Culture
Feb. 2, 2023
After Harry Potter, Daniel Radcliffe Obviously Had to Play a Farting Corpse
By Alex Welch
Culture
Feb. 1, 2023
If The Last of Us Made You Bawl Your Eyes Out, You Need to Revisit This Zombie Rom-Com
By Mónica Marie Zorrilla
LEARN SOMETHING NEW EVERY DAY.
Share: