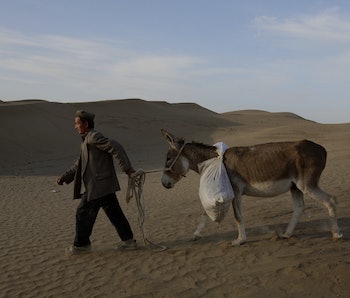 The title of greatest newspaper correction of 2015 might’ve been locked down in January, when the New York Times cleared its throat and admitted, in that familiar sorry-not sorry of the set-rec, that it had invented a nation out of whole cloth and random consonants. “An earlier version of this article misstated the name of the country whose army chased Tommy Caldwell’s kidnappers,” the correction read. “As other references correctly noted, Caldwell was in Kyrgyzstan, not Kyrzbekistan, which does not exist.”

Poor Kyrgyzstan. (And poor Kyrzbekistan, frankly.) The deeply landlocked former Soviet state in the smack-middle of Asia is an ancient crossroads of civilizations, and people can’t so much as remember whether it’s maybe kinda half-Uzbekistan. Things only got worse today when the Wall Street Journal charged into the geography spelling bee word without consulting Wikipedia. Kyrghyztan, anyone?

I’m going to go on a pointless limb and say this is a crime dumber by half than Kyrzbekistan. The Journal graphic didn’t even finish in a -stan suffix. This is a Scrabble rack with a stomachache. This is a sensible TKTK as rewritten by a cat wandering around a keyboard. This is a transcription of a death rattle.

But what if it’s not? What if, unlike sad-sack Kyrzbekistan, new-wave Kyrghyztan is totally frickin’ real? The author of the above tweet, Casey Michel, spent time with the Peace Corps in Kazakhstan and just finished a master’s at Columbia that had him focused on central Asia. As of this afternoon, he describes himself as “a freelance writer scrimping and scuffing and saving enough money to live out the dreams of his forefathers, and finally see Kyrghyztan in the flesh.” He, if anyone, would be able at least to explain Kyrghyztan to a lay audience. I asked him to imagine its wonders. Here was his reply:

Kyrghyztan has captured the collective Western imagination for generations. The name alone catapults images, truisms, that have held for millennia, back past the first time any Westerner — Marco Polo? Alexander the Great? — first heard the grace of “Kyrghyztan” cross his ears. There are the caravanserais, loaded with camel-bladder sacks of dates and goat-ash. There are the dervishes in their johdpurs and goatees, swinging at the beggar-boys chasing a loosed, squealing donkey. There is the entrance to the souk, the caterwauling, carnivaling sprawl of Persian figs, Bashkir wool, Uyghur peppers, Turkestani midgets. There is the cobblestoned path, hemmed by age-old trellises and birch-side cottages, leading north, over Uulu-buulu-uulu Hill, the Talamanohman Desert scorching somewhere in the distance. All the while, all through the hawking and the haggling and the incense-bombed bedlam, the louche Prince Ablai Khansolo lords in his respite, fingering his mustache with a fresh manicure. He wants you to come, to visit Kyrghyztan. (He promises he won’t throw you in the bug-pit like the others.) He wants you to show you his sheikh-dom. He wants you to share it with your friends. He wants you, and the world, to know the majesty of Kyrghyztan.

Please, Journal, do not affront this grand nation with anything so sensible as a correction. Not that it would matter. The Times invention of a presumably central Asian republic has had staying power, despite the paper’s belated turn toward accuracy.