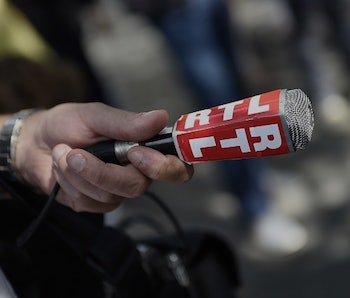 Interviewers should nurture a sense of intimacy with their subjects. That connection could go beyond taking notes for an article; often, a writer becomes so immersed, so genuinely interested in the person, that the conversation would be enthralling even if it weren’t for print. And then maybe the writer falls a tiny bit in love. And his or her editor says, Fuck it, let’s go full swoon.

Here are some cases of presumed professional journalists melting down into human valentines.

1. The now-infamous Vanity Fair interview with True Detective’s Nic Pizzolatto. Vulture and Salon already slowed down to stare at the wreckage, so I’ll leave you with this quote, in which the interviewer describes Pizzolatto:

He was 37 but somehow ageless. He could’ve stepped out of a novel by Steinbeck. The writer as crusader, chronicler of love and depravity. His shirt was rumpled, his hair mussed, his manner that of a man who’d just hiked along the railroad tracks or rolled out from under a box. He is fine-featured, with fierce eyes a little too small for his face. It gives him the aura of a bear or some other species of dangerous animal. When I was a boy and dreamed of literature, this is how I imagined a writer—a kind of outlaw, always ready to fight or go on a spree.

Fawning Verdict: 10 out of 10. An interview, or another sequel to 50 Shades of Grey? The writer has Pizzolatto’s picture under his pillow and a candle-lit shrine to him in his foyer. He probably told his colleagues not to disturb him while he typed it up in his darkened office, sipping Prosecco from a plastic cup and weeping lightly, with early Portishead playing on his earbuds.

Now normally when a date is 30 minutes late I get pissed. But when Outlander star Sam Heughan finally showed up to meet me for a round of Woodfords at The Wayfarer, a Mad Men-esque Midtown watering hole, he was so apologetic — not to mention complimentary of my new dress! — that it was hard not to let him off the hook. (Has anyone ever stayed mad at a blue-eyed Scotsman drinking scotch on a leather love seat while wearing a leather jacket? I rest my case.) Plus, there’s something romantic about sneaking away for midday cocktails with a man whose tasteful-yet-titillating sex scene all but changed the way female sensuality is framed on TV.

Fawning verdict: 9 out of 10. She calls it a date and lingers on the romantic ambiance! And she’s downright giddy that he complimented her. It’s still a shade less purple than the Vanity Fair piece.

3. The GQ interview that calls Chris Hemsworth “The Manliest Man In Hollywood.” It’s right there in the title, but the interviewer also refers to Hemsworth as “The Flan-Haired One” and “The God of Hair.”

Fawning Verdict: 8 out of 10. It’s unclear whether the interviewer wants to jump Hemsworth or just wants to shave his head and steal his hair. Either way, there’s no question that he pocketed a lock of it when he wasn’t looking.

4. This interview with Jessica Alba. Here’s how it opens:

Relaxing on a patio in Santa Monica, wearing heels, slim jeans, and a clingy orange tank top, Jessica Alba hardly looks like a no-nonsense entrepreneur, let alone a mother of two. On the contrary, she looks like the woman who has been seducing audiences for over a decade as one of the sexiest actresses in the world. The truth, though, is that she’s all three. Which makes her even more amazing.

Fawning Verdict: 9 out of 10. The interviewer was this close to sounding impartial, as if he was only describing her as sexy because that’s her image, ok? But he totally blew his cover in the last two sentences. Dude’s under a spell.

5.This interview with Taylor Kitsch. As Jezebel has pointed out, the interviewer is essentially writing her own fan fiction starring Taylor Kitsch as a version of himself who is the same as his character in Friday Night Lights:

As he walks toward me, I stand, my heart kicking in my chest. I’m nervous. This is a high-stakes game for me: FNL is my favorite show, Riggins my favorite character. I’m afraid that Kitsch is going to be a world apart from Riggins — that he’ll talk in actorspeak, use the word process a lot and tell me about the benefits of a gluten-free diet, gaze into every reflective surface, and fluff his hair. I’m afraid that meeting him will kill the fantasy, basically. The sun is slanting into my eyes, so while I can see that he’s got something on his head, I can’t see what. It’s only once he gets near that I realize it’s a motorcycle helmet, but worn like a backward baseball cap, pushed off his face and up on his crown. Immediately I start to relax, because it’s such a Riggins maneuver.

Fawning Verdict: 10 out of 10. Look, I get it, I might react the same way if I had to interview Kit Harington and he did something that was very Jon Snow, but I would keep my giddiness in my head and not put it in the article.

Profiles and interviews are supposed to pique the reader’s interest in the subject; incite them to find out more about them. They’re not supposed to cause you to put it down and say, “I’ll just leave you two alone.” But then again, it’s that much more entertaining for the rest of us. So you keep doing you, fawning interviewers. You’re not making things weird. You’re making them amazing. Because you’re amazing. You’re so magnetic and commanding and your hair is so shiny, and you’re everything I ever imagined an interviewer would be when I was a kid, a wild spirit, free as the wind, with an aura of a tiger or some other kind of sexy animal, and oh my god, did you just look into my eyes?! Do you feel this too?

More like this
Culture
Jan. 14, 2023
2,454 years ago, one eerily familiar event led to the downfall of Ancient Athens
By Rachel Hadas and The Conversation
Culture
Jan. 15, 2023
Amazon keeps selling out of these 50 weird but genius products with near-perfect reviews
By Allison Bolt
Innovation
Jan. 19, 2023
A robot choreographer reveals why M3GAN — and all robots — should dance
By Molly Glick
LEARN SOMETHING NEW EVERY DAY.
Share: