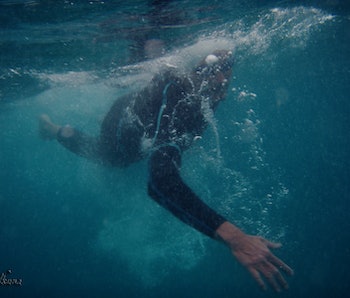 Swimming is swimming. We either assume we know how to do it or we avoid water. Every Olympics season, we watch triangular humans reach amazing underwater speeds using the four strokes at the heart of the sport: the front crawl, breast stroke, backstroke, and butterfly. It’s a sport we understand. Or not.

Sports scientists have begun to suggest that we’re not swimming as fast as we could be. They’ve been developing a new stroke designed to give athletes an edge in global competitions. For inspiration, they’ve turned to the likeliest of sources, the humble-but-good-at-swimming fish.

It seems like an obvious choice, but the mechanics of fish swimming don’t work naturally with the human body. Fish glide beneath the water on their sides, wiggling their tails to propel them forward. A study in Scientific American showed that tuna were able to swim twice as fast as dolphins, their mammalian cousins rocking a 90-degree tail twist. The prevailing explanation is that it’s the fish who have the proverbial upper hand because the vortexes that are generated while flicking their tails spread out horizontally through the water. Dolphins — and humans — swim face down, and the vortexes created by kicking slam into the ground and bounce up to the water’s surface, disrupting the swimmer’s movement forward.

Adapting the fish kick to human bodies isn’t easy, but it is effective. Misty Hyman used the fish kick in the 2000 Olympics during the underwater portion of her race, eventually winning gold. In an interview with Nautilus, she explained that the swimmer needs to hinge at the shoulders, ribs, hips, and knees, then move the head and arms together in a single, undulating motion. It’s essentially doing the dolphin kick — the technique used in the butterfly stroke — horizontally, and it’s a lot more difficult than it looks. Demonstrating the fish kick, Hyman looks both graceful and disconcertingly minnow-like.

Another advantage of the fish kick is that it all takes place underwater. The strokes we’re used to seeing take place at the water’s surface, but this environment has its limits. As surface swimmers, we’re limited by our ‘bow wave’, a nautical term used to describe the wave that grows in front of a boat as its bow moves through the water. Whereas some animals (like dolphins) can literally jump over that wave, we aren’t capable of getting around it — but we can get under it.

It’s up for debate whether the difficulty of mastering the fish kick outweighs its potential for vastly increased speed, but it hasn’t stopped multiple Olympic athletes from giving it a try. Whether the Olympic Games will someday feature exclusively underwater races, only time will tell.

But they totally should.