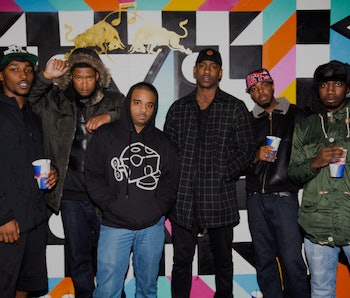 A new wave of grime music hype started bubbling up when Kanye West brought a slew of UK rappers on stage for his flame-throwing “All Day” performance at the BRIT Awards.

It’s not the first time the bass-heavy subgenre has caught on in the States. (Dizzee Rascal was a critical darling back in the early ‘00s.) But the fervor died down while rappers like Skepta and Wiley (of the Boy Better Know crew) built up discographies and climbed up the UK charts. Now, with that Kanye blowout, something clicked and Americans are once again interested in the dance-rap hybrid.

Stormzy: “Know Me From”

More like this
Mind and Body
6.23.2022 1:15 PM
7 trippy optical illusions that reveal how your brain perceives reality
By Jennifer Walter
Entertainment
6.19.2022 11:30 AM
You need to watch the best monster thriller of the '90s before it leaves HBO Max next week
By Mónica Marie Zorrilla
Entertainment
6.16.2022 11:30 AM
30 years ago, Tim Burton made the sexiest and most sinister superhero movie
By Mónica Marie Zorrilla
Related Tags
Share: