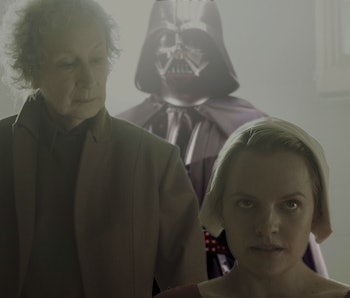 It’s no surprise that author Margaret Atwood gets interviewed a lot about The Handmaid’s Tale. But, the author of the 1985 book which the popular Hulu series is based upon, recently had one of her interview take an odd turn. Atwood says the 9/11 terrorist attacks and Star Wars are linked.

On Tuesday, Variety published an interview with Atwood in which she mentioned 9/11 in relation to a stage production of The Handmaid’s Tale and also, Star Wars. “They didn’t get that idea from my opera, don’t worry,” Atwood said of the 9/11 terrorists. “They got the idea from Star Wars.”

When asked if she really believes the terrorists got the idea to hijack planes and destroy the World Trade Center from Star Wars Atwood said, “Remember the first one? Two guys fly a plane in the middle of something and blow that up? The only difference is, in Star Wars, they get away.”

While this seems like it came out of nowhere, there is some context to add to Atwood’s interview. She was discussing a 2000 opera version of The Handmaid’s Tale that was put on in Denmark. It begins with footage of various things exploding that is supposed to be the future dystopian in which the story is set. One of them being the Twin Towers, but after the tragic attack happened the image was removed from the production. After the interviewer and Atwood agreed about the “creepy” coincidence.

Famously, the Star Wars stuff she’s referencing to happens during the Rebel’s assault on the Death Star in Star Wars Episode IV: A New Hope. Luke Skywalker and Biggs fly into the Death Star trench before Luke takes the shot that destroys it. Then the two fly off with Han Solo, who came through with a last-minute save to allow Luke to win the day.

Press tours have been known to take some odd detours, but this theory is high on the list.