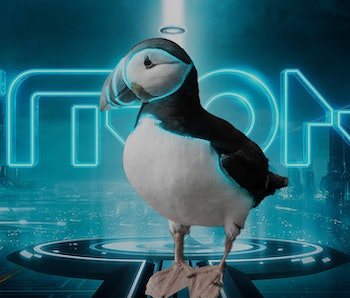 Birds are awesome. They fly (well, most of them do), they form massive swarms, and they’re basically living dinosaurs. But puffins, which are already cool because they’re birds, just got a whole lot cooler, thanks to their special eyes and some freaking sick shades featured in photos released last week.

On March 29, ornithologist Jamie Dunning tweeted photos of a museum specimen puffin wearing some serious hater blockers, which he says he’ll use to protect birds’ eyes from ultraviolet light in an upcoming study. The glasses are prototypes mocked up for a study of how puffins see UV light, since, as Dunning recently discovered, these birds’ beaks fluoresce under UV light.

Since most birds possess the trait known as tetrachromacy — meaning they can see a wider range of colors than most humans do — it’s likely that puffins can see the UV-reflective coloration on each other’s beaks. Dunning suspects these beak color patterns could have something to do with how the birds choose mates, and he aims to find out.

This Atlantic puffin looks a little bit like Kanye West ten years ago with the stunna shades on, but they’re actually helping to protect birds’ eyes for a study that should be published later this year.

Dunning started wondering about puffins when he found out that crested auklets, which belong to the family Alcidae along with puffins and a handful of other seabirds, have day-glow beaks, the CBC reported on Friday. Back in February, he tweeted his discovery that the Atlantic puffin’s beak does indeed glow under a UV light.

“It was sort of discovered by accident,” he told the CBC.

In that tweet, he showed what the fluorescing beaks look like, and he quoted a press release from a 2011 study that outlined how birds’ can see far more colors than they actually display in their plumage.

Through millions of years of evolution, most birds developed four types of cone cells in their retinas, enabling them to potentially see 100 million colors. When you compare this to the human ability to see color, which caps out at about 1 million colors, you realize that the world we see is a lot different from the world that puffins might see.

“They can see colors that we can’t conceive and that’s super important, actually,” Dunning told Newsweek in February, outlining the reasoning that’s led him to investigate how living puffins actually respond to UV light.

Since the species is listed as vulnerable on the International Union for Conservation of Nature’s Red List, the Atlantic puffin’s sexual habits are becoming a matter of public concern. Dunning hopes that studying its mating habits and preferences scientists will be able to aid conservation efforts.

“It’s necessary to understand how Puffins select a mate and possibly how they provision offspring,” Dunning told a concerned observer on Twitter. “Puffins are red listed and steeply declining.”

More like this
Science
22 hours ago
Are coyotes dangerous to dogs and cats? Here’s how to keep your pets safe
By Tara Yarlagadda
Science
Jan. 21, 2023
Plague study complicates a commonly held belief about the Black Death
By Samuel Cohn, Philip Slavin and The Conversation
Science
Jan. 17, 2023
Why can’t I understand my dog? Recent research may offer an answer
By Tara Yarlagadda
LEARN SOMETHING NEW EVERY DAY.
Related Tags
Share: