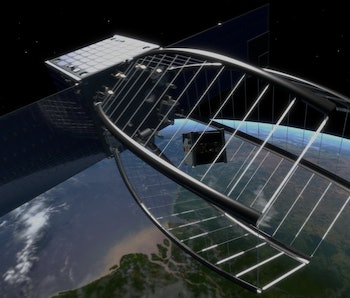 Remember the movie Gravity? And how everything went to hell in the first 15 minutes because of tiny bits of space garbage? The movie may have exaggerated matters, but in real life, orbital debris vexes space agencies around the world. Proposed solutions range from using harpoons that latch onto and pull in debris, to lasers capable of pushing objects out of the orbital paths of satellites and space stations. Now an international team of researchers under the CleanSpace One (CSO) project wants to test a conical net that could scoop and destroy debris like an astronaut Pac-Man.

In just a little under 60 years since the Soviet Union first launched Sputnik 1 into space, Earth’s orbital plane has become a weightless landfill, strewn with millions of small pieces zooming at over 22,000 mph. The U.S. Space Surveillance Network, operated by the Air Force, estimates that more than 500,000 pieces of debris larger than 1 centimeter are circling the planet today. Heaven is full of bullets.

Only 21,000 pieces — all larger than 10 centimeters, are constantly tracked. Never mind that millions of smaller pieces less than 0.2 millimeters are still capable of damaging important instruments. In 2009, more than 13,000 close calls were tracked weekly — imagine almost getting into a car wreck 2,000 times a day. The U.S. National Research Council warned NASA in 2011 that orbital debris amounts were reaching a “critical” level. As countries keep shooting more objects into space, the number of debris pieces flying around Earth’s orbit could quadruple in the next 50 years.

One of the problems: Collisions between objects beget more debris. It’s what happened in 2009 with the Iridium-Kosmos collision, which created more than 1,000 pieces of debris larger than 10 centimeters, plus an innumerable amount of smaller fragments. There’s a big fear that this could lead to what’s known as the [Kessler Syndrome](https://en.wikipedia.org/wiki/Kessler_syndrome — where a few collisions create a positive-feedback loop that cascades into more and more collisions.

Just take a look at this real-time 3D map of all 150,000 pieces space junk orbiting the planet — which includes active satellites as well. If Kessler is right, that’s a shitstorm waiting to happen.

So a garbage disposal in space would probably be extremely useful. COS’s prototype design is like a net that forms into a cone, unfolding and closing back down once it’s able to capture an object. COS hopes to launch it in 2018.

When the Pac-Space-Man is finally launched into space, it will attempt to swallow up the SwissCube satellite — a 10-by-10 centimeter object that has been orbiting Earth for more than five years. The two objects will then combust together in the atmosphere.

If the test proves successful, using more junk-eating machines in space could prove adept at skimming larger chunks out of orbit and protecting the satellites and instruments that cannot shield themselves or dodge debris. If there’s a way to develop it cheaply, it could be the best chance we have of reducing space trash and clearing up Earth’s orbit for future satellites and space stations.

More like this
Science
7.3.2022 1:30 PM
NASA move could help the International Space Station stay in orbit without Russia
By Nancy Atkinson and Universe Today
Science
6.27.2022 12:00 AM
NASA lit 1,500 fires on the International Space Station — and discovered something new
By LAURENCE TOGNETTI and Universe Today
Science
21 hours ago
25 years ago, NASA landed its first rover on Mars — and catalyzed the search for life
By Doris Elín Urrutia
Related Tags
Share: