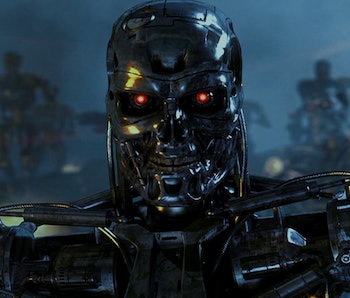 Scientists from nearly 30 countries are boycotting a South Korean university for partnering with a defense company to build what researchers fear are “killer robots.”

The boycott comes ahead of a United Nations meeting on autonomous weapons, scheduled for next week in Geneva. Artificial intelligence researchers say that Korea Advanced Institute of Science and Technology (KAIST) and its partner, defense manufacturer Hanwha Systems, are already building weaponry that is “ethically dubious” by international law. Fearing a situation straight out of The Terminator, more than 50 leading academics have signed the boycott. In an open letter addressed to Professor Sung-Chul Shin, President of KAIST, signatories agreed to not collaborate with the university, Hanwha Systems, or its partners.

“There are plenty of great things you can do with AI that save lives, including in a military context, but to openly declare the goal is to develop autonomous weapons and have a partner like this sparks huge concern,” Toby Walsh, boycott organizer and professor at the University of New South Wales, told the Guardian. Walsh has called on the U.N. to impose a ban on lethal autonomous weapons, and names Hanwha as a threat to that agreement. The company is one of South Korea’s largest weapons manufacturers, but is known for making cluster munitions that are banned in 120 countries under an international treaty. The United States, Russia, China, and South Korea are noteworthy absentees from the treaty.

The upcoming U.N. meeting will have to not only address this boycott, but the other “combat robots” that already exist in South Korea. The country’s Dodaam Systems is currently manufacturing autonomous robots capable of detecting targets over a mile away. The United Arab Emirates and Qatar are recent customers.

The proliferation of drones and autonomous weapons has already sparked international outcry for regulation, and next week’s U.N. meeting is expected to address the latest developments. Walsh hopes to collect enough support from international scientists to convince researchers in South Korea that it’s better to de-accelerate the arms race than to develop autonomous killer robots.