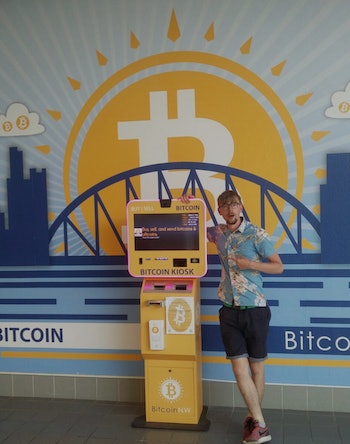 When James Grant and Thomas Hezlett stepped off their London flight into the United States last summer, they had three things: a vague plan to make it from Seattle to Miami in five months, a backpack full of basics to get them through the cold nights, and $350 in bitcoin.

James, having arrived in Vancouver on July 1 just in time for Canada Day (a holiday dearly held onto by Canadians) and met Thomas in Seattle three weeks later. From there, the plan was simple: they would buy a car on Craigslist, drive to California, and make their way to the East Coast in time for their flight on December 13. If offered the opportunity, they would spend a cryptocurrency that its most zealous proponents claim would smash big banks, decentralize global power, and free an individual from the clutches of Wall Street.

During their trip, James and Thomas ended up spending a grand total of 0 bitcoins. This is the story of how, despite a surging price and swarm of new buyers, bitcoin failed to make a dent in the lives of people outside of the techno-bubble.

Full disclosure: James and Thomas are friends of mine, and I lived with them for three years.

It would be the perfect year for such a trip: Bitcoin finally surpassed the heady days when the Mt. Gox exchange reigned supreme, back when it peaked at $1,149 in November 2013. The exchange’s widely-publicized loss of $450 million worth of bitcoin sent the price crashing to under $400 just five months later. The spike and subsequent drop piqued James’ interest.

“I downloaded an app at that point, so that I could track the price of it,” James, a 25-year-old former business development manager for Contented Brothers, tells Inverse. “Every time I was taking breaks I was looking at the price of it on my phone. It was the beginning of my obsession, I realize now in hindsight.”

While they were curious about these weird new digi-dollars, they didn’t actually buy any for a while. Contemporary exchanges had convoluted authorization schemes, requiring users to hold up identification and take a selfie against a plain background. It wasn’t until 2017, as bitcoin began to soar, that they finally decided to buy. When the pair started planning their trip to the U.S., Thomas started thinking about how bitcoin could change their trip.

Thomas saw two major factors as possibly causing a surge in American bitcoin usage. As the land of AirBNB, Facebook, Twitter, Microsoft, and Google, American companies have dominated the digital revolution. At the same time, the country’s banking lags behind its European counterparts; it only adopted chip cards in 2015, 11 years after they were first introduced in the U.K. Thomas thought both of these signs pointed to a country primed for bitcoin.

“Regardless of retailer enthusiasm, no more retailers could realistically accept bitcoin transactions after 2014 because the Bitcoin network was only processing a maximum of three transactions per second,” Chris Wilmer, professor at the University of Pittsburgh and co-author of Bitcoin for the Befuddled, tells Inverse. “To be clear, this is an artificial and arbitrary limit that could easily be raised or removed entirely, but several vocal groups wanted to keep it where it was. The lack of present-day retailer adoption of Bitcoin is not surprising in this context.”

Instead of a country increasingly powered by bitcoin, James found himself baffled at the arduous process of handing over his debit card, waiting for a receipt, writing a tip, and waiting a while to see if the transaction went through.

Their journey wasn’t over yet, though. The pair bought a Honda Accord 2005, a two-door coupe, for $5,400. The pair had to use a combination of multiple bank cards to withdraw cash to the maximum daily limit, with surcharges and poor exchange rates.

“We were far too British about buying the car,” Thomas says. “The guy even tried to give us $100 for our trip, and we didn’t accept because we wanted to be nice and polite.”

The first bar the pair went to on their trip was the 10 Barrels in Portland, Oregon. With its bright atmosphere, wooden tables, well-dressed customers, this was clearly no dive. Surely, a trendy craft beer emporium would be forward-thinking enough to accept bitcoin, they thought. How naïve they were.

“Most shops say if they accept contactless or not,” Thomas says. “Surely, there would be a sticker that said they accept bitcoin.”

As they weren’t in California, though, they didn’t let this put them off. Seeking the sights of Silicon Valley, a place Elon Musk once described as somewhere people “can do anything,” they set forth to witness the birthplace of personal computing. On their way, they struck digital gold: the Shoppes at Gateway, a mall in Eugene, Oregon, had a bitcoin ATM.

The landscape of a mostly empty mall served as poured cold water over their dreams.

“It was in such a sad, empty mall,” James says. “That entire shopfront was just dedicated to one little bitcoin machine about the size of an ATM. So I saw it and I was like, ‘Hah, that’s funny,’ but then I was also like, ‘Feels like a weird…it doesn’t feel like it’s in a high-prestige place.’”

CoinMap lists 11,729 places globally to spend bitcoin. It sounds like a lot, but it’s a small enough figure to mean that many people could go days without seeing a business that accepts bitcoin. Nonetheless, when the pair finally reached Silicon Valley, they couldn’t believe that it was not the futuristic beacon they’d hoped for.

As they left Silicon Valley and made their way through the deep south of the country, they gave up hope of finding a business that takes bitcoin.

“I was astonished that there was nowhere in America where you could pay for stuff with crypto,” James says. “I actually thought San Francisco would be like a technology haven…it was not the kind of technical wizardy future I imagined.”

Plenty of people have succeeded where James and Thomas failed, through concentrated efforts to seek out Bitcoin retailers. Amelie Arras, marketing director at Adastra Marketing, won the annual Money20/20 race in 2017 to get from Las Vegas to Toronto using only bitcoin. Arras was one of five contestants, with the other four restricted to using gold, hard cash, chip-and-pin, and contactless.

“I got stuck in Chicago for 20 hours, and the challenge was like…’bit what? bit what?’,” Arras told Bitonline in an interview. “That was the toughest thing, to explain what it was.”

Some communities have moved one step further, using bitcoin every day as much as possible.

“Yes, I live only with BTC, with no bank accounts,” a Redditor with the username Bitcoin-Yoda tells Inverse. By their estimations, they buy around 50 percent of their regular needs locally, from merchants they have persuaded to take bitcoin. “All depends on people’s willing to dump the fiat and use freedom money BTC. If a person that is awake and realizes the big fucking lie of fiat money and the slavery of the banksters, [they] will have much determination to make this step.”

“It’s actually quite easy to do,” Reddit user btc-forextrader, who also claims to use bitcoin everyday, tells Inverse. “Before I go to any new locale, I’ll search out businesses and lodging sources that accept bitcoin. When I can’t find any that do, I simply utilize one of two debit cards that I load with BTC to pay with fiat.”

Another Reddit user, Daryn Freeman from Finland, was using bitcoin everyday through TenX, a service that allows users to spend cryptocurrency anywhere through the use of a chip-and-pin card. Unfortunately, in January 2017 card provider WaveCrest lost its card issuing license, disabling all cards until further notice. Freeman is hopeful that the issue will be resolved in due course. For now, though, there are no merchants near where he lives that accept bitcoin, meaning he’s back to using fiat for daily transactions.

“I still use cryptos as the preferred method for settling transactions between friends and family,” Freeman tells Inverse.

James and Thomas ended up using a similar startup for most of their transactions. The Revolut card, which allows travelers to spend in a local currency without fear of getting penalized, enabled them to spend cash internationally.

“The Revolut card worked very, very well for us,” James says. “It was so usable, that it reduced how much I felt like there was a need for bitcoin.”

“With Revolut, travelers are able to spend using the interbank exchange rate anywhere in the world, with no hidden fees,” the company tells Inverse. “You can also withdraw up to £200 free of charge per month, and have access to market-low rates for device and travel insurance.”

Even this firm has its eyes on the crypto craze, though. On December 5, just as the pair were planning their return to the UK, the company launched support for bitcoin, Litecoin and Ethereum.

James and Thomas took a plane from Miami a few days earlier than scheduled and headed home.

In many ways, the pair’s experience was to be expected. While the price of bitcoin rose dramatically during the trip, the number of transactions per day remained relatively static. In February 2017, the most transactions processed on one day was 350,560. In November, that figure was 371,091, a mere six percent increase in volume. Over the same period, the total value of transactions in one day spiked from a February high of $378 million to a November high of just under $4 billion. The average value of each transaction soared over the course of the year, suggesting bitcoin value rose primarily because of big investment.

“The price of a bitcoin is still very low compared what it could be if it became a currency adopted as a worldwide standard. So, the jump in price could be reflecting investors who have a long-term view of Bitcoin,” Wilmer says. “That being said, as with any asset that rises in price quickly, it is usually accompanied with exuberance from investors that do not fully understand what the potential of Bitcoin is.”

Although filled with stories about the majesty of the Grand Canyon, the sounds of New Orleans and the wonders of Walmart, the pair left somewhat disillusioned with bitcoin.

“I was surprised that I didn’t see any in the states,” James says. “It made me think that it was less advanced than I had imagined. Less a part of the fabric of society, less a part of the tech scene that you didn’t actually see people buying anything with it.”

Busy traveling around the country, away from the media hype around the latest tokens, the experience made the pair question the effect cryptocurrency is actually having on the man on the street.

“I’d say I’m quite an average guy, living a very average life,” Thomas says. “Cryptocurrency’s had no impact on my life whatsoever.”