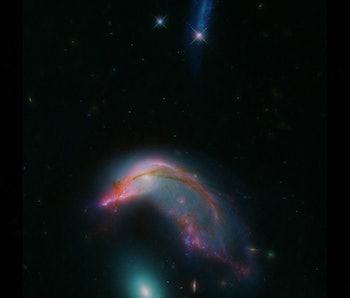 The Easter Bunny isn’t the only one finding colorful eggs. Data from NASA’s Spitzer and Hubble space telescopes were combined to show distant interacting galaxies, known collectively as Arp 142. But these galaxies bear a striking resemblance to a penguin guarding an Easter egg.

“Who needs the Easter Bunny, when you have an Easter Penguin?” NASA tweeted on Sunday. The two galaxies form an uncanny scene of a colorful penguin guarding its Easter loot, but in reality the two galaxies couldn’t look more different as their mutual gravitational attraction slowly pulls them together.

The penguin, otherwise known as NGC 2336, was most likely a normal-looking spiral galaxy at one point in its existence, but thanks to newly-formed hot stars, its shape is becoming more twisted and distorted. The Spitzer telescope was able to pick up on strands of gas mixed with dust, which appear as red filaments when observed at longer wavelengths of infrared light.

Meanwhile, the egg, aka NGC 2937, is relatively plain. NASA suggests this galaxy is a population of much older stars, as evident in the greenish glow and less distorted shape. Noting the absence of glowing red dust features inside the egg, physicists think this galaxy must have lost its reservoir of gas and dust years ago, meaning it can no longer form new stars.

The penguin and egg galaxies are about 23 million light years away from each other, roughly 10 times farther away than Earth’s nearest major galactic neighbor, the Andromeda galaxy. Still, these two galaxies are slowly being drawn to each other through a gravitational pull and will eventually merge into a single entity.

When the two galaxies merge, their distinct populations of stars, gas, and dust will intermingle to form a new image that hopefully won’t need data from both the Hubble and Spitzer telescopes. NASA’s upcoming James Webb Space Telescope is expected to see all of these wavelengths of light on its own, and with dramatically better clarity. But until then, the Easter Penguin will be guarding its dyed egg.