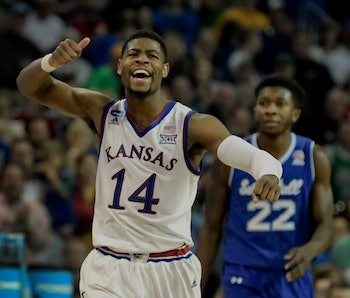 Amid all the chaos and carnage of the rest of this year’s March Madness, the Midwest Regional has been almost all chalk, with the top two seeds facing off for a Final Four berth in the Kansas Jayhawks and the Duke Blue Devils.

Kansas has had to gut out victories to make it this far, while Duke followed blowouts of Iona and Rhode Island with a tight victory over the upset-minded Syracuse Orange. A hive mind of fans predicts who will move on to the next round.

The hive mind takes a little time to make its pick, but it seems fairly good about Duke one way or the other. It ends up picking the Blue Devils with low confidence and 76 percent brainpower, but most of the dissent is in favor of picking Duke with high confidence.