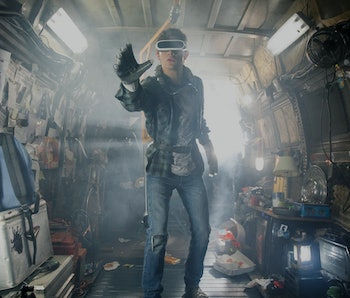 I was fortunate enough to catch a preview screening of Ready Player One, Steven Spielberg’s adaptation of Ernest Cline’s futuristic novel. It blew me away. What really caught my attention wasn’t just the awesome references to 1980s pop culture, or the mind-blowing set pieces. It was also the sub-text of the philosophical and cultural impact of gaming and related technologies.

The film is set in a world where humanity is in real crisis. The environment has collapsed, the economy has collapsed. Essentially, society as we know it has collapsed. And what is humanity’s response to these crises? Escapism. Much of human life is spent in a virtual simulation called The Oasis.

In this vision of the future, everything that we currently do in the real world – going to school, going to work, socialising, leisure – is done in this vast virtual environment. This may seem wildly speculative and unlikely – but as my research in gaming shows, we are much nearer to such a reality than it may seem.

The Reality of VR

The main underpinning theme of Ready Player One is mankind’s reliance on a simulated world – The Oasis – which is accessed through virtual reality equipment. While virtual reality has been a concept that has been around since the 1950s, it has never been more available to the average consumer. Technologies such as Oculus Rift and other mobile based technologies are starting to allow users to further immerse themselves in computer generated alternate realities. This has wonderful applications in the gaming world, but there are some more serious applications that are being researched and are even in use.

For example, Augmented Reality – a kind of virtual reality that mixes what we see around us with overlaid computer-generated imagery – can now enable doctors to see into a human body without cutting it open. This technology combines CT scans and MRI data, and projects them onto the relevant area of a patient’s body. This has fantastic implications in the medical world, as it means that explorative diagnosis can avoid any unnecessary invasive procedures.

The goal of virtual reality research is to render as realistic an experience as possible. This includes vision through higher and higher definition VR goggles, sound through noise cancelling high definition earpieces, touch through feedback technologies such as the VRgluv, and even taste and smell.

Total immersion is the key and, as you can see, we are already encroaching on this territory.

If we are starting to see technology that could potentially give us access to virtual worlds like The Oasis, we might need to consider how that kind of immersion will affect humanity. We are already aware that immersion into game systems can have a detrimental affect on health. People have even died playing them.

As technology advances to simulate the world with ever higher levels of fidelity, we need to ask whether these virtual worlds could ever become preferable to the standard everyday reality we were born into. If we listen to people like Mark Zuckerberg, who claims that virtual reality could eventually be made better than reality, then this might lead people to spend more time plugged into VR in their daily lives.

This being the case, would society end up turning its back on the problems of the real world? And would this necessarily be a bad thing? After all, that might also mean that human environmental impact could be reduced.

Another aspect alluded to by the premise of Ready Player One are the effects of social media. In the film, society spends much of their waking lives online, leaving only to eat and sleep. In this sense, the Oasis represents a kind of full immersion social media platform with a multitude of applications.

We only need to look around the next crowded area we go to in order to see people browsing social media platforms on their ubiquitous mobile devices. Individuals are spending more and more time on social media platforms and it is easy to conclude that, if something like The Oasis was released today, the impulse we are seeing in society would very easily translate to this more immersive platform.

How We Place Value

Early in Ready Player One, we discover that the founder of The Oasis has passed away, with no heirs. And so he states in his will that the keys to the controlling stock of The Oasis and his company can be found somewhere in his creation. This sparks a whole new movement in society called “The Hunt” which sees huge numbers of people trawling for clues that might reveal the location of this hidden “Easter Egg”. Indeed, so serious are the implications of this that entire companies are formed just to crack the puzzles left by the founder of The Oasis, and the devious tricks and efforts even spill over into the real world.

And so the film also sheds an interesting light on what we, as human beings, see as valuable. Traditionally, we are used to attaching value to tangible things that we can touch. But we are moving into an age when people are spending money on artefacts that are entirely digital. We only need to look at millionaires like Anshe Chung (real name: Ailin Graef), who got rich by selling virtual land and property, to see that people can make millions just by trading in 1s and 0s.

Additionally, games companies use in-game purchases, as well as other monetisation strategies, to increase income from products initially distributed for free. And it would be remiss not to mention cryptocurrencies when we are discussing the fact that value systems are becoming more and more digital.

As our lives become more digital, so are the things that can assist us in this new world that we are prepared to invest in.

Perhaps, then, Ready Player One isn’t as fantastical as you may think. There is plenty of evidence to show that the realisation of this alternate, fully accessible, virtual world may be just a matter of time.

This article was originally published on The Conversation by Craig Weightman, Lecturer in Games and Visual Effects, Staffordshire University. Read the original article here.

More like this
Innovation
Sep. 21, 2022
Gaming tech could ease pain during surgery — here’s how
By Sofia Quaglia
Innovation
Sep. 15, 2022
AI could revamp the once-doomed Smell-O-Vision
By Joanna Thompson
Innovation
Sep. 17, 2022
Why everyday household chores may be practically impossible for today’s robots
By Ayonga Hereid and The Conversation
Share: