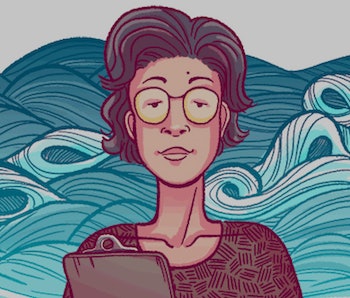 On her 98th birthday, Google Doodle honored the pioneering life of the late Japanese geochemist Katsuko Saruhashi, who became the first woman to earn a doctorate in chemistry from the University of Tokyo in 1957. As a child, raindrops sparked her curiosity, leading her to a life of studying the oceans.

The bulk of her professional life — 35 years — was spent at Japan’s Meteorological Research Institute. She developed her own measuring system, “Saruhashi’s Table.” The methodology determined carbonic acid in water based on three factors: temperature, pH level, and chlorinity. She was also a leader in nuclear research that got results: She developed a method to track radioactive fallout over ocean water that resulted in restrictions in 1963 on nuclear experiments in the ocean.

Sumiko Hatakeyama, writing for Contemporary Japanese Feminist Debates at Penn, observes Saruhashi’s life: “She was indeed aware of the fortunate and unusual life she was living as a woman scientist, and that was precisely what motivated her to work hard, both for the advancement of science and for the advancement of women in science. Then, while gender did not shape Saruhashi’s life in the same way as it did other women scientists’, gender was perhaps affecting Saruhashi’s life as a scientist in the most fundamental way.”

At both ends of her career, Saruhashi was a pioneer. In 1958, she established the Society of Japanese Women Scientists. In 1981, after becoming the first woman to win many prizes historically given to men, she established her own Saruhashi Prize, an annual award given to a female scientist younger than 50 who is a role model for the next generation.

Saruhashi is in good company with her Google Doodle, as the search giant often honors under-recognized scientists and engineers. Others who have been honored recently are astrophysics pioneer Subrahmanyan Chandrasekhar, astronomer Guillermo Haro, and hole punch inventor Friedrich Soennecken.

Google brought to light this Saruhashi quote on Thursday that underlines one of her missions: “There are many women who have the ability to become great scientists. I would like to see the day when women can contribute to science & technology on an equal footing with men.”