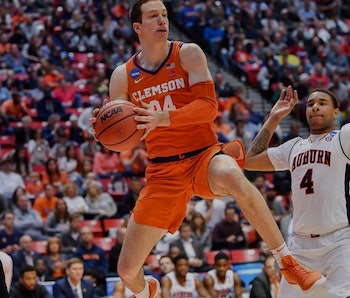 The Kansas Jayhawks survived key injury and a general sense they’re one of the weaker elite teams this year to become one of only two top seeds to reach the Sweet Sixteen. Having avoiding Virginia and Xavier’s fate, can the Jayhawks keep it going and reach the Elite Eight?

To do that, they must defeat the fifth-seeded Clemson Tigers, who absolutely destroyed Auburn in perhaps the most impressive rout of opening weekend. A hive mind of fans predicts who will emerge victorious.

The swarm likes Kansas here, predicting a Jayhawks victory with high confidence and a decently high 84 percent brainpower behind the pick.