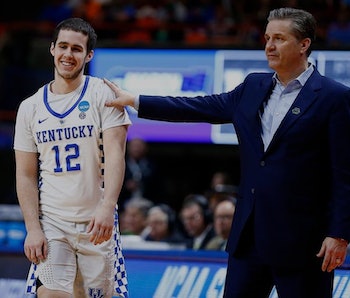 The five-seed Kentucky Wildcats are the last power standing in the most busted bracket in NCAA tournament history. The highest seed remaining in the chaotic South Regional, they have a clear path to the Final Four… or do they?

The first team to try to stop them will be the nine seed Kansas State Wildcats, who ended the Cinderella dreams of the 16 seed UMBC Retrievers. A hive mind of fans predicts who will win.

To predict the result of this and other games, Unanimous A.I. used what’s known as swarm intelligence to forecast the bracket. About 60 college basketball fans worked together as a hive mind to make picks. As you can see in the animation below, each participant controlled a little golden magnet and used it to drag the puck toward the answer they thought was the most likely outcome. As the users saw the puck move toward a particular outcome, it triggers a psychological response. They readjust their decision-making, building toward a consensus.

The hive mind likes Kentucky to win here with high confidence and 79 percent brainpower behind the prediction. There’s a small bit of dissent here in favor of the other Wildcats, but not a whole lot.