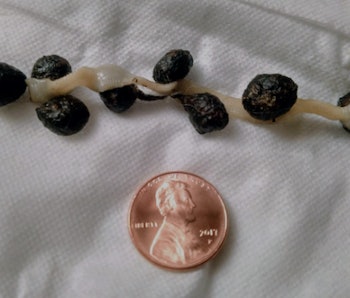 Having pets means spending a lot of time looking at poop. At best, this means a brief glance at hard black pellets or little brown swirls before scooping it up with a plastic-bagged hand. At worst, it means experiencing what one terrified Reddit user felt upon discovering something much worse than poop in a pet rabbit’s droppings. A veterinarian assured Inverse that it was probably not especially harmful to the poor rabbit, but that didn’t make it any less gnarly.

On Friday, user scubadoodles posted a photo to r/WTF that would horrify even the most seasoned pet owner. The photo shows bulbous black shapes sprouting off an elastic, off-white string, like a grotesque set of Christmas lights or evil grapes on a vine. It becomes even more vile upon closer inspection, which reveals that the “vine” has the telltale rubbery, striped exterior of a worm.

The caption reads: “This enormous fucking tapeworm that just came out of my poor bunny.”

Kenneth Welle, DVM, clinical assistant professor of veterinary clinical medicine at the University of Illinois, confirmed the worst about this image. “This does indeed look like a tapeworm, and the feces connected to it do look like rabbit feces,” he told Inverse in an email. “Tapeworms, in general, tend to be fairly large as parasites go.” In biology, parasites are defined as species that mooch off another species to survive, often to the latter’s detriment.

The person who took this photo ensured that anyone who viewed it would know just how big this tapeworm is by inserting a penny into the repulsive scene. A penny is 0.75 inches in diameter; this worm is easily five pennies long, making its total length a bit more than 3.75 inches. The number doesn’t seem large until you imagine that 3.75 inches inside a rabbit’s tiny intestines forcing its way out of a little rabbit butt.(Scubadoodles confirmed in a subsequent post that the bunny is only three pounds.) No bueno!

Welle admits he’s not an expert on rabbit parasites, but he says that tapeworms are pretty uncommon in domestic rabbits, so this is a bit of an unusual case. One of the reasons they are uncommon is because tapeworms usually have “intermediate” hosts — that is, hosts that they use as a vehicle to get to their final, “definitive” host. Often, what happens is that these intermediate hosts harbor eggs from the worms that infect them, and when the final host eats the intermediate host, the eggs hatch, starting the life cycle anew.

Intermediate hosts for tapeworms that infect pets vary depending on the species of tapeworm, but they include fleas (for Dipylidium caninum, which infects dogs), small rodents, and large animals (for Taenia and Echinococcus species). Because rabbits are herbivores, they don’t usually ingest intermediate hosts that might give them a tapeworm infection.

“It would be an accidental ingestion,” says Welle.

Animals infected with tapeworms sometimes get itchy around the anus, so they may be observed licking the area or dragging it across the floor. They don’t, however, seem to pose too much of a danger to the pet itself, although weight loss can occur if the infection is very serious, according to the American Kennel Club. The most pressing reason for treating a pet that has tapeworms is to prevent the infection from being passed on to humans, where they can be extremely painful and harmful.

We can rest assured the rabbit that pooped out this scary cluster of fecal grapes is fine. “When an adult tapeworm, like the photo you sent, is present, usually this causes minimal harm to the host,” says Welle.

“The parasite ‘steals’ some nutrients, but often there is little other damage done.”

More like this
Science
7.2.2022 12:00 PM
Why is my cat scratching furniture? The answer might surprise you
By Tara Yarlagadda
Science
6.27.2022 11:00 AM
Letting your cat go outside could spread “life-threatening” parasites — new research
By Amy Wilson, Scott Wilson and The Conversation
Science
6.23.2022 6:00 PM
Reptile longevity is even more complex than we imagined — study
By Elana Spivack
Related Tags
Share: