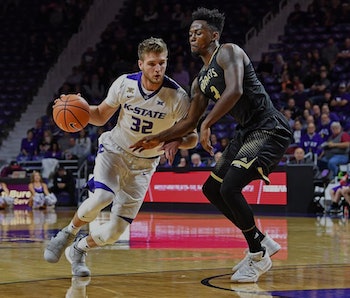 Fair to say nobody saw this second-round match-up coming. The 16 seed Retrievers from the University of Maryland, Baltimore County didn’t just upset the number one overall seed Virginia Cavaliers, the first time that’s ever happened in the men’s tournament, they beat the crap out of them in a 74-54 rout.

Can they repeat the trick against the nine seed Kansas State Wildcats, who scored a much, much milder upset by taking down the Creighton Bluejays in the first round? A hive mind of fans predicts who wins.

Picking before the tournament began, the hive mind understandably predicted Virginia would win the opening round, and then it liked them to win this game with high confidence and 94 percent brainpower. Since UMBC walloped that same Cavaliers team, that means the Retrievers are absolute locks… right?

More like this
Gear
3 hours ago
How To Use Google’s New AI-Powered Visual Search
By Jackson Chen
Entertainment
Jan. 31, 2023
Robert Zemeckis Has Found His Latest Tech Tool With AI De-Aging — And That’s Good
By Dais Johnston
Gear
Jan. 31, 2023
Why Mercedes-Benz’s Self-Driving Milestone is a Big Deal for Autonomous Cars
By Jackson Chen
LEARN SOMETHING NEW EVERY DAY.
Related Tags
Share: