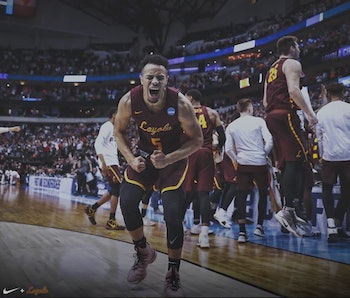 The third-seeded Tennessee Volunteers took care of business against Wright State in the first round. Now they get to face a second double-digit seed in the form of the 11-seeded Loyola-Chicago Ramblers, who took down the Miami Hurricanes in their opener.

For expert analysis of the Volunteers’ chances, we turn to Tennessee native and Inverse managing editor Hannah Margaret Allen, who offered this comment when contacted for this piece.

“Go big orange,” she says. “Volunteers for life.” She also pointed toward this video, in which the Volunteers advise fans not to pick them.

To predict — if not pick! — the result of this and other games, Unanimous A.I. used what’s known as swarm intelligence to forecast the bracket. About 50 college basketball fans worked together as a hive mind to make picks. As you can see in the animation below, each participant controlled a little golden magnet and used it to drag the puck toward the answer they thought was the most likely outcome. As the users saw the puck move toward a particular outcome, it triggers a psychological response. They readjust their decision-making, building toward a consensus.

Though the swarm correctly predicted Loyola-Chicago would pull the upset, the second round forecast accidentally put Miami back in as Tennessee’s opponent. The swarm was pretty certain the Volunteers would win, split between a high and low confidence pick. It ultimately settled on a low confidence choice with 85 percent brainpower. Whether the presence of the Ramblers — who looked good in the first round, not just lucky — instead of the Hurricanes affects that prediction is an open question, but Tennessee is probably best considered a slight favorite either way.