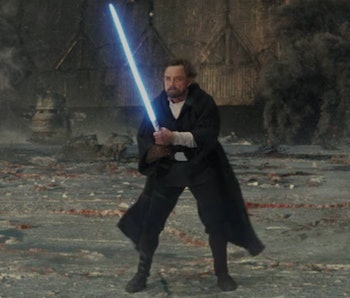 Of all the counterintuitive opinions about Star Wars, there’s one truly fascinating notion that doesn’t get explored as much as it should: maybe these movies are better without any dialogue. And now one elusive Last Jedi special feature will make you wonder if it’s not better as a silent film.

On Tuesday, Lucasfilm made Star Wars: The Last Jedi available for digital download, and if you watched the film specifically on the Movies Anywhere app, you were able to access a special feature not available anywhere else: The Score-Only Version of The Last Jedi. That’s right, you can watch the entire movie without any dialogue or sound effects at all. And you know what? It might be better that way.

Back in 2012, author and critic Camille Paglia argued that George Lucas’s much-derided Star Wars prequel trilogy could actually be viewed as a work of high art, at least visually. “No one has closed the gap between art and technology more successfully than George Lucas,” Paglia wrote. Later in the same article (published in The Chronicle of Higher Education) Paglia points out the artistic power of some of the often-mocked scenes between Anakin and Obi-Wan in Revenge of the Sith. She writes:

The violent red river of primitive emotion is forgotten as the separated twins are delivered to their adoptive parents, at peace against idyllic open landscapes of mountains and desert across the galaxy. The exquisite tenderness with which strong men handle babies here surely reflects Lucas’s own experience as a single parent who retired for two years to raise the first of his three adopted children.

It’s a powerful observation and one that was taken a step further by blogger and critic Emily Asher-Perrin in 2013. What if you watched the prequels on mute? Though not every fault of those films is erased by treating them as silent films, Asher-Perrin did concede that “it cannot be denied that these movies are visually unique in a way that no one else ever matched.”

Fast-forward to the contemporary fan schism over The Last Jedi. Was the movie too tonally inconsistent? Did it alter Luke Skywalker’s character too much? Was the astral-projection thing out of nowhere? And, were all those crazy plot twists earned?

Well, if you watch the The Last Jedi with the score only, you might come to the conclusion that Rian Johnson’s cinematography combined with John Williams’s music taps into what Paglia and Asher-Perrin were talking about. Even though George Lucas didn’t make these decisions, the entire tone of The Last Jedi feels more firmly operatic, or perhaps more accurately, balletic, when no one is allowed to talk. The character arcs and stories in The Last Jedi might be complicated, but they’re not complex. The story works when beautiful visuals intertwine expertly with stirring music. And that music is smart and varied enough to tell that story all on its own. There’s a breathless minimalism to watching the film just only Williams’s music for accompaniment, allowing the cluttered feeling a Star Wars movie can sometimes have to melt away.

In other words, future Star Wars movies are in trouble when John Williams retires from composing after composing the music for Episode IX. The score-only version of The Last Jedi proves a Star Wars movie may only need unique imagery and music, and really, nothing else. Not even the sound of a lightsaber.

The Last Jedi is out now on digital download and will be released on a physical Blu-ray and DVD on March 27. The score-only feature is only on the Movies Anywhere App.