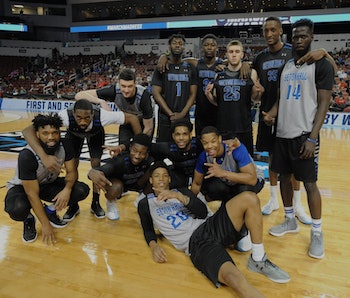 First-year coach Kevin Keatts has North Carolina State back in the NCAA tournament, getting victories over the elite likes of North Carolina, Duke, and Arizona.

With that kind of resume, can the ninth-seeded Wolfpack beat the eight-seed Seton Hall Pirates, which has managed its own big wins to accompany some truly putrid losses? A hive mind of college basketball fans has a prediction for who will emerge victorious.

The hive mind expects the Wolfpack to upset the Seton Hall Pirates, though only with low confidence. The swarm gives an edge to NC State with 76 percent of its collective brainpower, so there’s still a chance that Seton Hall will come out on top.

The game tips off Thursday at 4:30 p.m. Eastern in Wichita, Kansas on TBS