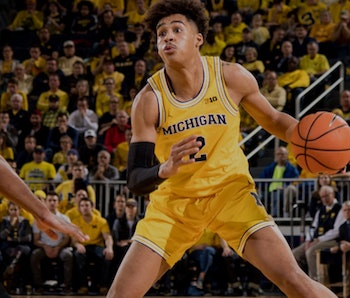 The Michigan Wolverines enter the NCAA tournament on a nine-game winning streak, including an impressive defense of the Big Ten tournament championship. Now they turn their attention to the Montana Grizzlies in the opening round.

Can the Big Ten champs make short work of the Big Sky champs, or is an upset a possibility? A hive mind of college basketball fans has a prediction.

The swarm likes Michigan to win this. It’s a pick with high confidence and 90 percent brainpower, meaning it’s close to a lock.

The game tips off on Thursday at 9:50 p.m. Eastern in Wichita, Kansas on TBS.

More like this
Innovation
11 hours ago
“Quantum materials” could give the human brain a run for its money, scientists say
By Nathaniel Scharping
Innovation
8.5.2022 11:00 AM
Alexa could diagnose Alzheimer’s and other brain conditions — should it?
By Joanna Thompson
Mind and Body
7.27.2022 2:00 PM
Too hot to run outside? Sports scientists share 7 tips to break a sweat safely
By Ash Willmott, Justin Roberts, Oliver Gibson and The Conversation
Related Tags
Share: