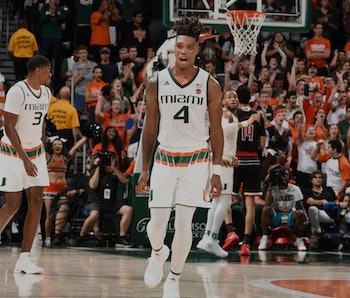 The six-seed Miami Hurricanes have been living on the edge, gutting out their final four regular season wins by a combined eight points. Can the Hurricanes’ knack for late-game magic keep them afloat against their opening round opponent?

That shouldn’t seem too difficult, given we’re talking about a relatively lowly 11 seed in the Loyola-Chicago Ramblers. But the Missouri Valley upstarts grade out very well in both offensive and defensive numbers, meaning they might have what it takes to pull an upset. A hive mind of fans predicts who will win.

This is going to be another nail-biter. The hive mind has Loyola-Chicago just barely nudging out Miami, albeit with low confidence. The swarm decided this with 71 percent of its brainpower, so chances are this will be a close game.

The game tips off Thursday at 3:10 p.m. Eastern in Dallas on truTV.