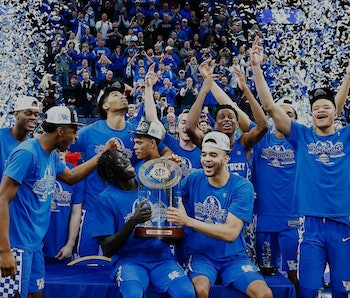 It’s Wildcats versus Wildcats as Kentucky, college basketball’s ultimate blue blood — give or take Duke, we guess — goes up against underdog Davidson.

Kentucky hasn’t quite been up to its usual juggernaut standards, nabbing a five seed after winning the Southeastern Conference tournament, but John Calipari’s squads have been known to go on deep tourney runs even without ultra-elite talent, as seen most recently in 2014. Davidson, for its part, is hoping for a repeat of the magic that Steph Curry — you may have heard of him — engineered a decade ago when he led the team to the Elite Eight. A hive mind of fans predicts who will win.

The hive mind gives this win to Kentucky with high confidence. This was determined by 92 percent of the swarm’s brainpower, which makes it almost certain that the Wildcats will move on to another round.

The game tips off Thursday at 7:10 p.m. Eastern in Boise, Idaho on CBS.