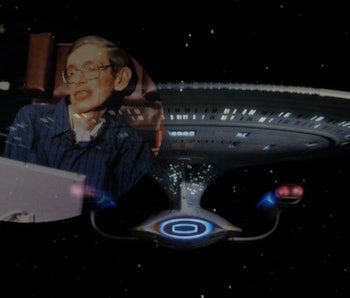 Sadly, Stephen Hawking has died. The renowned physicist and theoretician was 76 and, according to his family, “died peacefully” in on Wednesday. Hawking is most famous for his theories about the formation of the universe, particularly his 1988 book A Brief History of Time. Hawking was also a science fiction fan, and in 1993 made sci-fi history. In a brief cameo, he became the only person to play themselves in an installment of the mega-popular franchise Star Trek.

In The Next Generation episode “Descent”, the android Data conjures up holographic recreations of Sir Isaac Newton, Albert Einstein and Stephen Hawking for a game of poker. Newton is annoyed, Einstein is loving it, and Hawking is telling jokes about the nature of space/time. Notably, Hawking wins the game by bluffing Einstein.

When Hawking visited the set of Star Trek, and saw the warp core that allows starships to travel at impossible speeds and traverse the galaxy, he joked “I’m working on that.”

Of course, other scientists and innovators have been mentioned or alluded to on Star Trek. The most recent Trek, Star Trek: Discovery even name-checked Elon Musk. But, to this day, Hawking remains the only person to play themselves on Star Trek.

Hawking was a self-described science fiction fan, and radically believed certain sci-fi tropes — like time travel or human colonization of other planets — might one day be possible. Of time travel he said this: “Time travel used to be thought of as just science fiction, but Einstein’s general theory of relativity allows for the possibility that we could warp space-time so much that you could go off in a rocket and return before you set out.”

From the age of 22, Hawking was afflicted with a motor neuron disease. At the time, he was given only a few years to live. And yet, he survived. Which probably explains another wonderful Hawking quote: “Real science can be far stranger than science fiction and much more satisfying.”