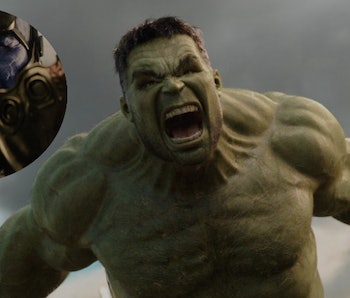 From the looks of the Avengers: Infinity War trailers, Marvel’s greatest heroes are in for some serious trouble. Thanos is coming for the Infinity Stones, and he won’t let anything, like our entire planet, get in his way. While we don’t know much about the intergalactic villain, it seems one of Marvel’s smartest minds may have the answers the other Avengers need.

During an interview with Slash Film on the set of Infinity War last year, Mark Ruffalo and Chadwick Boseman discussed the looming war. Ruffalo explained that Dr. Bruce Banner has the information the other heroes need about Thanos.

“Banner knows probably more about Thanos than probably anybody and he’s really trying to impress on everybody how dangerous he is,” Ruffalo explained, adding that he’ll do his darndest to bring the Avengers back together after their falling out in Civil War.

It’s a little bit of a Chicken Little [scenario]. He comes in screaming bloody murder … He’s seen what damage he can cause and how powerful he is and the entire group is in disarray, so he’s also getting caught up on what’s happened here and is trying to get them to transcend their differences and impress upon them how much danger they’re actually facing.

He also said that The Hulk “is also mightily impressed by Thanos,” which mean Banner experience with Thanos was surely horrific, because Hulk does love to see things get smashed.

Given where viewers last saw Banner, it seems he’ll have an early showdown with Thanos in space. After defeating Hela (and destroying Asgard) in Thor: Ragnarok, Banner heads to Earth on a spaceship with Thor, Valkyrie, Loki, and the remaining Asgardians when they came upon a massive spaceship, which has been confirmed to be Thanos’s. The big purple guy is probably after the Infinity Stone that Loki swiped from Asgard’s vault. From the looks of it, Thor and the Hulk weren’t strong enough to stop Thanos from getting what he wants.

In trailers, we’ve seen Banner hanging out with Doctor Strange and Iron Man, indicating that he makes it to Earth after the first encounter with Thanos while Thor gets sent flying through space. If Banner comes bringing crucial firsthand information about Thanos’s, he’s come to the right place. Doctor Stranger is brilliant and magical, which is useful when it comes to the Infinity Stones, while Tony Stark is another one of Marvel’s brightest minds. Banner’s biggest problem may actually be getting the heroes together in order to use what he knows.