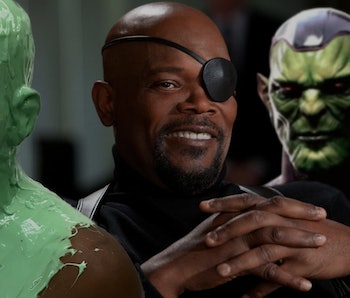 Nick Fury is the linchpin of the Marvel Cinematic Universe, as it wasn’t until Samuel L. Jackson and his eyepatch stepped out of the shadows at the end of Iron Man that moviegoers realized there were more superheroes to come. However, a new photo from the set of Captain Marvel suggests that Nick Fury is going to look different in the upcoming movie. Whether it’s just de-aging (since the film’s set in the Nineties), or something more alien remains to be seen.

On Saturday, Jackson posted a trio of photographs to his Instagram account. In the images, Jackson is sitting in a chair while makeup artists encase his head in plaster goop. It’s a little gross to look at, and pretty funny to imagine the famous actor trapped underneath a Nickelodeon-esque layer of green slime.

“Caught a lil’ nap while going thru the process today!” Jackson wrote in the caption, along with the hashtags “#captainmarvel,” “#nickgettingfurious,” and “#lifecastsabitch.”

Lifecasting is an extremely common practice in special effects, as in order to make prosthetics, special effects technicians need to know exactly what an actor’s head looks like. This is probably not Jackson’s first rodeo, but some fans online suspect there’s a little more going on with this lifecast than meets the eye. Sure, the Nick Fury of 20 years ago would look different than the modern-day MCU incarnation, so it makes sense that Jackson would need to wear some new prosthetics. Jackson himself said as much.

“You’ll see Nick Fury with another guy’s face,” Jackson explained to the AV Club in January. “Somebody that’s got two eyes, so that’s a whole big deal. You’ll see. It’s prior to the eye injury, no eye patch.”

But, could it be more than that? The villains in Captain Marvel are an alien race known as the Skrulls, and their most dangerous feature is their ability to change shape. Could it be possible that Jackson is getting a life cast made in order to create an evil Skrull version of the MCU hero? It’s possible, but it’s also possible that everyone’s reading into this too much just because the gloop on Jackson’s head is green like a Skrull.