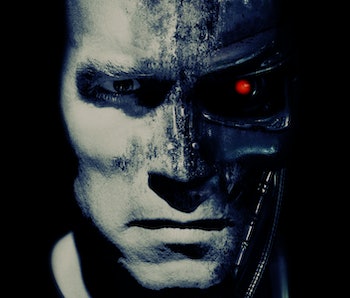 As society endows us with more and more opportunities to engage in the pursuit of individual happiness (witness: gay marriage, TK, legal weed), technology is doing the same. Google Glass is, whatever else you consider it to be, a lifestyle choice. So is embedding electromagnets in your fingers. So is that advanced prosthetic arm. So is that metal faceplate. But there will be a backlash to this sci-fi inspired morphological weirdness - there is always a backlash. Those on the vanguard of transhumanism will almost certainly be targeted by luddite bigots. But is it a hate crime to attack someone for being part robot?

When people don’t like the looks of the tech you’re sporting, things can get ugly. Steve Mann, called the “father of wearable computing,” considers himself to be the first cyborg. He’s had a wearable computer for 40 years, and developed a precursor to Glass called EyeTap to help him with his eyesight. It was the attention around the EyeTap that led to an altercation in a Paris McDonald’s. Here’s how Mann recounts it from his blog:

My family and I seated ourselves in the restaurant right by the entrance, so we could watch people walking along Avenue Champs Elysees while we ate our meal.

Subsequently another person within McDonald’s physically assaulted me, while I was in McDonald’s, eating my McDonald’s Ranch Wrap that I had just purchased at this McDonald’s. He angrily grabbed my eyeglass, and tried to pull it off my head. The eyeglass is permanently attached and does not come off my skull without special tools.

At the time, some postulated that the “first cybernetic hate crime” had taken place. But what does it take for a crime to count as hate? Congress has defined a hate crime as a “criminal offense against a person or property motivated in whole or in part by an offender’s bias against a race, religion, disability, ethnic origin or sexual orientation.” One could argue that Mann was attacked for having a disability (and for refusing to live with it), but the law as it stands doesn’t really protect the biologically enhanced.

The definition of hate crime has been expanding since the initial law hit the books in 1968. Hate crimes based on sexual orientation, for example, didn’t exist in the U.S. (legally at least) until California passed a statute in 1984. It wasn’t until 2009 that President Obama signed a federal equivalent into law.

In 2013, the Manchester U.K. police force began recording crimes against alt subcultures — the BBC references goths, emos, and punks — as hate crimes. That the body modification or the biohacking movements would parallel the treatment of punk or goth cultures isn’t terribly far-fetched, but the hate crime definition might not even have to expand that far.

If you Google transhumanism or cyborg or body modification, you’ll find about a million picture of sexy robots and sexy aliens and sexy humanoid computers. People are demonstrably attracted to hardware and modification (a fact that isn’t often touched upon when Trekkie freaks get assaulted). Furthermore, much of the tech we’re likely to see augmenting humans in the near term is designed to help people deal with disabilities. One could argue that the two major groups of early adopters are already covered.

Religion may enter into this as well. We’ve yet to see the rise of a major techno-religion (other than arguably scientology), but this seems inevitable. America is not a big fan of government-defined religion, which means that a transhumanist community could create a church as a protective barrier if need be. They already have a political party.

Until the future comes with a cure for assholes, we’re going to have to deal with the inevitable haters in whatever form their bias takes.