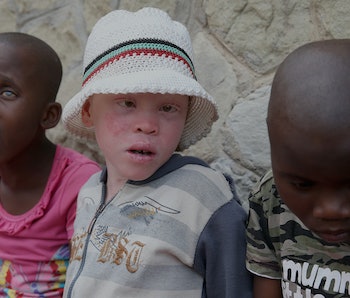 Five Tanzanian children born with albinism are being treated at Shriners Hospital in North Philadelphia after fleeing their home and its gruesome black market for their body parts. Local superstition fears them as monsters — ghosts or damaged demons — yet holds that their limbs have magic properties. Fools will pay a good price for a potion mixed up from albino limbs on their way to war, and doctors abroad are increasingly providing asylum as albino hunts started spiking earlier this year.

Terrible, insane shit! Before you get too smug, though, remember that people with albinism face their own struggles in the West. As recently as last year, albinism activists petitioned the United Nations to establish International Albinism Awareness Day on June 13 because of widespread discrimination. One of the speakers who addressed the U.N. on the topic, Canadian activist Garth Mullins, told the CBC that many of the people born with albinism — about one in 20,000 — may never meet another person with the condition. “Marginalization, isolation, discrimination, bullying, and some violence — these things, you feel alone,” he told the broadcaster, “and you don’t understand that there’s a systemic character to it.”

Some of the bullying starts with pop culture itself, which has made progress in addressing other minority groups. Shane Black had to completely rewrite the Mandarin for Iron Man 3, rightly calling the original Asian character a “racist caricature”. A property like The Walking Dead featuring only one black character will be dissected in endless think-pieces about the persistent problems of racism in Hollywood.

But depictions have barely nudged for characters with a distinct lack of melanin. A character with albinism is usually A) evil B) magical or C) both. We don’t understand: It’s systemic. I spent half an hour Googling and the best I can come up with for a sympathetic character with albinism is [Powder](https://en.wikiquote.org/wiki/Powder_(film), and that motherfucker’s made of telepathic lightning.

Hey, it’s great that we’re beyond the horrific stuff that’s happening in Tanzania. Still, it might help if we stopped exporting stories that quietly reinforce our own crude stereotypes.