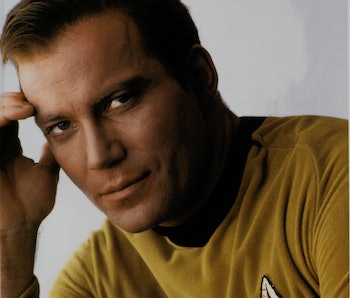 The most confident person on the planet is William Shatner. But the Shatner confidence is dangerous for a journalist. Just like James T. Kirk turned the tables on so many of his adversaries on Star Trek, Shatner can wrest control of a conversation if you hesitate. One second into my phone call with the legendary actor, I’m already losing control.

“Well I’m very busy but I thought I’d make a difference in your case,” Shatner says. He follows this unprompted sarcastic non-sequitur with “My day was going pretty good up until now.” Make no mistake, Captain Kirk is negging me at the top of the interview. Do I still feel honored to be talking to him? Absolutely. It’s awesome to hear his voice coming out of my cell phone. But, Captain Kirk is in my head. I’m briefly thrown off my game.

Shatner isn’t on the phone to talk to me about Star Trek. Instead, he’s making the promotional rounds for a children’s movie called Aliens Ate My Homework, which had a direct-to-home-video release this week, based on a series of books by legendary YA author Bruce Coville. In the movie, only Shatner’s voice features, filling a role few actors have boldly attempted before: a talking extraterrestrial plant named Phil.

“I’ve become intrigued and entrenched by the unity of life, how much everything is alike, and the life force of everything that we don’t. Quite. Understand,” he tells me when asked why he took the role.

Unlike most people, Shatner doesn’t say “um” or “maybe” or “you know” when he speaks. If you’ve seen the “Risk is our business” speech from the original Trek, everything he says IRL feels exactly as convincing and motivating as that.

“Everything is alive, and then everything is dead,” he says. “And that goes for plants as well…Trees are open to. The. Sun. Which we know is because of chlorophyll, but they’re also open to the moon. And the stars. What’s happening then? There’s a whole mystique of plant life that you and I know so little about, and you know less than I know, and I know nothing.”

I ask if that’s why he took on the role of a talking plant.

“No,” he says. “But it’s astounding to think about life around us. Don’t you agree?”

Shatner makes you want to agree with him, even when you’re not sure what he’s talking about. It’s his magic, but it’s hard to understand how it works. There’s something about the way that Shatner speaks that causes us to just listen to him, like a very good preacher at a lectern or politician behind a podium.

Even Carrie Fisher noticed that William Shatner’s mere presence could cause fellow-celebrities to suddenly lose interest in everything, even their own self-pity. In her what was her final memoir, The Princess Diarist, Fisher reflected on her convention autographing experiences in the third person: “Wry and resigned, her older counterparts watch from behind their photo-laden tables in this cavernous convention center, armed only with pens, and their stoic grins, on the dark sides of their once shining stars, their focus-pulling days all but over, not to mention their days in general — there’s Bill Shatner!”

But, if it’s the voice that made the Captain, Shatner denies he ever intentionally cultivated such famous line-delivery.

“Edward G. Robinson became a friend of mine, and I said, do you know you go nah, nah, nah? And he said no, I don’t go, nah nah nah,” Shatner explains. “So, people who have some characteristic way of speaking, to my knowledge, don’t assume it. It’s just there, and slowly they become aware of the fact that they may talk in a pattern that is uniquely theirs. In fact, even now, I have to turn to my wife and say, is he imitating me?”

When Captain Sisko (Avery Brooks) time-travelled on Deep Space Nine and met Captain Kirk, he was similarly paralyzed as to what to say to the legend. “I want to ask him about fighting the Gorn on Cestus 3,” he said. But I can’t ask Shatner questions he’s been asked a million times. So instead I try a question worthy of Kirk’s moxy.

“Well for one thing I’ve never been asked,” Shatner says, sounding offended. But is he offended that no one from Star Wars have ever thought to cast him?

“It would pose an interesting dilemma, but it would I guess depend on how the part was written,” he says.

Separating Shatner from Kirk is the most difficult. And yet, just like Kirk was split into two people in “The Enemy Within,” I find myself compartmentalizing the two, if only for the sake of personal sanity. When I interviewed George Takei in 2016, he shocked me when he told me his favorite Star Trek Captain was Captain Kirk. Famously, Takei and Shatner are embroiled in a decades-long, and occasionally ugly, feud. But, Kirk and Shatner aren’t the same person, not even to someone who seems to hate Shatner: “I was always inspired by Kirk’s decisiveness,” Takei said.

Shatner is decisive, too: In 2017, he published two books: one about his love of horses called The Spirit of Horses and a science fiction novel called Zero-G. He starred in a comedy series called The Indian Detective, and produced and starred in his latest Star Trek documentary, The Truth is in the Stars. Shatner has done more last year than most people have done ever. But how? Like Captain Kirk, does Shatner split himself into different beings?

“I’m organized,” Shatner says without a hint of irony, as though staying on top of your Google calendar can make you a starship captain. “Apparently I’m very organized, I don’t recognize that in myself, but according to other people, I’m very organized.”

Soon enough, I’m told my time with Shatner is over. With most celebrities, they insist you use their first name. With Shatner, that didn’t happen, so I defaulted to calling him “Mr. Shatner” when we started the interview, even though he called me “Ryan.” So what do you call William Shatner when it’s time to hang up?

I do what comes naturally. I say: “Goodbye, sir.”

Aliens Ate My Homework is out now from Universal.