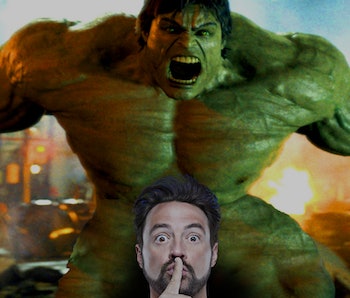 The tagline for the original Superman movie was “you’ll believe a man can fly,” and while superhero fans may have bought that, it seems they still have trouble believing the Incredible Hulk’s pants wouldn’t just get torn to shreds when Bruce Banner transforms. “Why isn’t the Hulk naked?” is an age-old Marvel question, but Kevin Smith has an answer.

On Wednesday morning, the director, who is recovering from a massive heart attack, responded to a concerned Marvel fan’s question. “Why is it when Bruce Banner becomes the Hulk, his pants don’t totally split apart?” Twitter user @andeew711 asked, tagging Marvel, Stan Lee, Mark Ruffalo, and Kevin Smith in her tweet. “Did I miss this answer somewhere in my life?”

In his response, Smith noted that the Fantastic Four had special costumes that adapted with their bodies, and suggested that maybe Bruce asked for a special pair of trousers to spare everyone the sight of the Hulk’s giant green penis.

“In Marvel Comics, Reed Richards invented a material made from Unstable Molecules, which allows his outfit to stretch, Torch’s to burn, Sue’s to go invisible. Maybe Bruce’s clothes too?” Smith suggested, before dropping a nerdy little Mallrats factoid. “Trivia: Unstable Molecules was also the production company name under which we made Mallrats.”

Now, this isn’t a perfect answer. If the technology exists, why wouldn’t Bruce Banner ask for a full set of rip-proof clothes instead of just burning through a shirt every time he transforms? The Fantastic Four explanation also only applies to the comics since the Fantastic Four aren’t part of the MCU — at least not yet. Some supplementary Marvel information reveals that Tony Stark made Bruce some special stretchy pants, as seen in Avengers: Age of Ultron, but we still have a shirt problem.

The real reason why the Hulk’s pants don’t tear off is because Disney isn’t about to make a superhero movie with technicolor, full-frontal male nudity. That’s more Watchmen’s style.