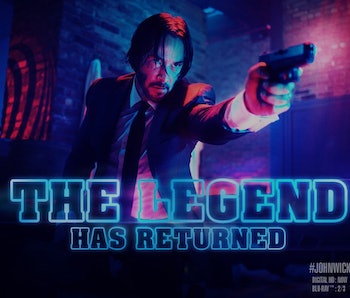 John Wick is perfect. Though the movie wasn’t hooked to any kind of long-standing-but-still-incalculably-boring comic book franchise or mega-hot blockbuster lead, it delivered on its difficult promise: mashing up anime, western, and crime revenge noir drama while paying homage to a million different things without ever spelling out exactly what those things were. It asked something of the audience — to give the directors the benefit of the doubt — without asking too much (runtime: 101 minutes). Hell, you don’t even have to be following along with the relatively nuanced main story to enjoy John Wick just wrecking gangsters in a fucking bathhouse. It’s a great movie.

I think about John Wick every day. It, and movies like it, symbolize something like the antidote to the modern malaise of having to sit through bloated franchises that you have to invest in. Wick is a one-off, but it’s dope as hell. You get strapped in as soon as you watch the former assassin suffer an act of extreme, beagle-murdering cruelty, to the point where audience members are gritting their teeth more than John Wick ever is.

John Wick knows what to do, and we’re all better for it.

There’s something to be said about the worldbuilding of John Wick, which is focused on an assassin’s code that’s never spoken about directly. The hotel that functions as the assassin’s primary hang is a sanctuary, and the movie gives you enough to let your imagination run and build what the rest of the world is like. For a movie that throws out a pretty straight line of revenge, that kind of nuance gives John Wick something extra and makes it feel bigger than it is.

But at the end of the day, John Wick sticks because of its fluid, forceful action. I think about John Wick every day. You should too.