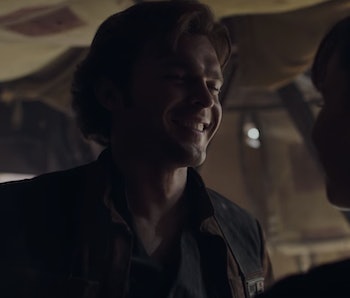 A French artist took to Facebook Friday night to claim that recently released posters for Solo: A Star Wars Story are taken directly from his own work for a set of albums in 2015.

Both the posters and the albums, the work of Hachim Bahous, share the same basic design. A specific word — the various characters’ names in the case of Solo, the different music genres featured in the albums — fills the space, with an image of either the specific Star Wars character or a representative artist inside the lettering.

That alone might not be enough to indicate something more than a coincidence, but it’s all the other details that make this look like a fairly direct lift of Bahous’s work. The posters and albums share almost exactly the same sets of coloring inside the lettering — the red, blue, and purple especially look to be just about identical — and they have the same tan backgrounds.

Here’s Facebook’s translation of Bahous’s original statement. It’s likely a little garbled, but the key points are clear: Neither Disney nor any other entities involved in the posters’ creation reached out to him for permission to base their designs on his poster.

Left the official posters of the next Star Wars (Disney), right the compiles for which I made the creation in 2015 for Sony Music France / Legacy Recordings France following the brief of the project leader Romain ‘Rpiz’ Pizon.

I am flattered that the quality of my work is recognized, but it is still pure and simple forgery, I have not been asked for my permission, I wish to be credited and paid for this work I have done for Sony!

As of this writing, Disney has not commented publicly on the similarities between the posters. We’re going to guess the company won’t adopt the line hinted at in the tweet above and argue that lifting these posters is just getting in the mindset of everyone’s favorite scurrilous Corellian smuggler. We also can only hope this doesn’t portend anything about Solo’s larger attempt to create a compelling simulacrum of a cool original.

Still, it must be said: So obviously ripping off existing designs to create admittedly beautiful posters is an act so simultaneously lazy and audacious that Han Solo would have to respect it. It’s understandable Bahous feels a bit differently on the matter.