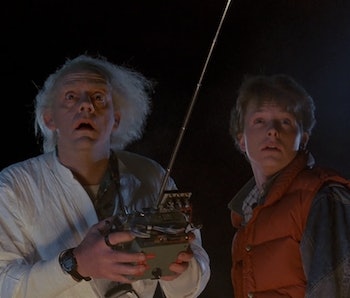 As Jurassic World continues to make buttloads of money (the current tally has it breezing past $1 billion just over two weeks after being released) and properties like Ghostbusters head back to theaters, Hollywood producers are looking to mine other fan favorites for box office gold. One remake/reboot/redo you won’t see anytime soon? Back to the Future, which turns 30 years old this week.

Back to the Future’s director Robert Zemeckis and producer Bob Gale told the Telegraph that any update to their 1985 classic was completely out of the question, that is, until they’re both dead.

The unbelievably forward-thinking contracts that the pair originally signed with Universal Studios in 1984 gave them final say on any potential BttF-related movie as long as they live. So thankfully you won’t be seeing any George McFly origin story, or the continuing adventures of Doc Brown, and any sequels won’t be able to fudge the timeline and take place in between the originals.

Even after they’ve shoved off this mortal coil without a Delorean time machine to cheat death, the pair hope their respective estates can try to block any updates that would besmirch the good name of their time traveling trilogy. Zemeckis told the Telegraph a remake, “can’t happen until both Bob and I are dead. And then I’m sure they’ll do it, unless there’s a way our estates can stop it.”

As for a sequel, Gale told Yahoo Movies late last year the simple reason it won’t happen: “We’ve seen a lot of sequels that are made years and years later and I don’t think I can name one that’s any good, that lives up to the originals. I don’t think you can recapture it.” It seems like he’s throwing some serious shade at BttF producer Steven Spielberg’s own foray into an old property, and we all know how that turned out.

We can all rest easy and kick back at the “Enchantment Under the Sea” dance knowing some greedy producer can’t ruin Back to the Future yet. Plus let’s face it, if they did remake it they wouldn’t get anyone better than Huey Lewis to cameo.