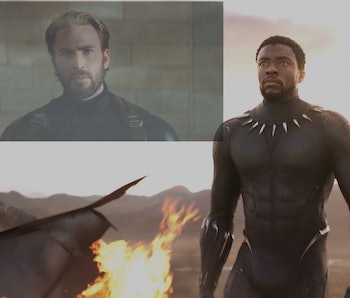 Everyone’s favorite part of the trailer for Avengers: Infinity War trailer is probably the moment when T’Challa says “get this man a shield,” signaling a bearded Captain America to step out from the shadows. But now that Black Panther has positioned itself right before Infinity War are we led to believe Cap was hiding in Wakanda for the whole movie?

Spoilers for Black Panther and Infinity War speculation ahead.

The post-credits scene of Black Panther reveals that Captain America’s BFF Bucky Barnes (aliases the White Wolf, the Winter Soldier) has been convalescing in Wakanda since the end of Civil War. But does this mean Cap was lurking around somewhere there too?

The answer right now isn’t clear, but if we dig into the Marvel Cinematic Universe timeline, it seems like Captain America must have been in Wakanda during at least one part of the events of Black Panther. Following his father’s death in Civil War, T’Challa has to do a bunch of stuff in order to actually become king, including fighting a few dudes by a giant waterfall.

Presumably, all of this happens after he and Shuri decide to put Bucky on ice, but because Black Panther seems to mostly take place in 2016, this means Captain America was briefly in Wakanda right before the movie begins. And, because we know Bucky was there for the entire time, does that mean Captain America could have been in Wakanda during the events of the movie too? But just chilling on the sidelines?

It seems really unlikely that Steve Rogers would have just hidden in a room somewhere while so much unrest was going down in Wakanda. But who knows? Because he’s pretty much a renegade on the run from the law, maybe he didn’t want the FBI agent Ross to know exactly where he was hiding.

The trailers for Infinity War also establish that a huge contingent of the Avengers end-up in Wakanda. But, it’s not clear how or when they get there. The post-credits scene in Black Panther only tells us Bucky is definitely there and seemingly, no longer brainwashed. So, if Cap is also in Wakanda, he could simply be off-screen, in a hut adjacent to Bucky’s, waiting for his best friend to get well again.

All of this will probably be answered fairly quickly or alluded to in a just a few months when Avengers: Infinity War comes out on May 4, 2018.

More like this
Entertainment
5 hours ago
Knock at the Cabin's Ending is Shyamalan's Most Surprising Twist Yet
By Eric Francisco
Entertainment
Jan. 30, 2023
The Last of Us Episode 3 Features One Subtle Video Game Easter Egg
By Alex Welch
Entertainment
9 hours ago
Mandalorian Season 3 Trailer May Reveal an Ancient Alien Species
By Dais Johnston
LEARN SOMETHING NEW EVERY DAY.
Share: