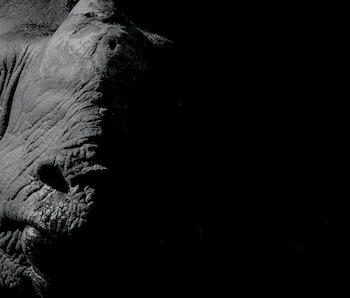 The 21st century is a fantastic time to be a bioengineer and a horrible time to be a black rhinoceros. The African species, which numbered 850,000 a century ago has been whittled to a rapidly diminishing population of around 5,000. In the hopes of one day rewinding this catastrophic decline, biologists are trying to crowdsource the sequencing of the diceros bicornis bicornis genome.

The project is a collaborative effort between several conservation-minded biotech experts, including University of Washington pathologist and bioengineer Dr. Charles Murray and Matthew Markus, the CEO of Pembient. Pembient is a San Francisco biotechnology company that wants to flood Chinese markets with synthetic — but biologically identical — rhino horn, 3D printed from lab-made keratin and perhaps delivered as rhino beer. (Keratin is the stuff your fingernails and rhino horns are made of. It is neither magical nor medicinal.) Pembient could learn enough from the genome of a single rhino named Ntombi, Markus told Inverse, to refine the way it synthesizes rhino proteins.

But before anyone can mine Ntombi’s genetics for data, the black rhino genome has to be sequenced first. The project is about halfway to raising $16,500 on Experiment.com, a crowdfunding platform sort of like Kickstarter except for science instead of resurrecting long-dead video games.

“There are still relatively few organisms whose genomes have been sequenced,” Murray says. “Until quite recently this was very difficult — time consuming and expensive.”

That’s not to say that animals aren’t getting their genomes done. The Genome 10K Project aims to collect a Noah’s ark of genetic data. And the southern white rhino, a more populous and larger species, had its genome sequenced in 2012. But what about black rhinos like Ntombi? “It’s not clear why the black rhinoceros has been left to the side for so long,” Markus says. He chalks the omission up to happenstance; but it could be that, because the southern whites had already been sequenced, the black rhino hadn’t been a priority.

Markus, Murray, and their collaborators aim to plug that gap. Ntombi, the poster rhino for the project, has already had blood drawn and preserved — and, bingo! Rhino DNA. The sequencing should be fairly straightforward, Murray said. “It is a big help to have the white rhino genome as a benchmark.”

The next steps in the sequence

With Ntombi’s DNA hosted on the servers of DNAnexsus, the biologists will have laid the foundation for comparative rhino genomics. “Once we get her sequence we can start to understand what makes a rhino a rhino, how the white differs from the black,” Murray says, “and provide information that will help track poached samples.”

Veterinarians could check for potentially disease-causing genes, and have a baseline to compare the other seven black rhino subspecies — three of which are already extinct.

The animals after tomorrow

Once we have a firmer understanding of black rhinoceros genetics, several theoretical doors open. “Down the road I am excited about using stem cells to understand rhino physiology and, potentially, to grow rhino horns in the lab to reduce poaching,” Murray says.

Markus prognosticates a bit further. For diceros bicornis bicornis, Markus doesn’t envision so much mammoth-style de-extinction but winding back the genetic clock; the smaller populations get, the more prone they are to inherited problems.

More like this
Science
7 hours ago
Letting your cat go outside could spread “life-threatening” parasites — new research
By Amy Wilson, Scott Wilson and The Conversation
Science
6.23.2022 6:00 PM
Reptile longevity is even more complex than we imagined — study
By Elana Spivack
Science
6.23.2022 11:00 AM
Historic Yellowstone flooding and more: Understand the world through 8 images
By Robin Bea
Related Tags
Share: