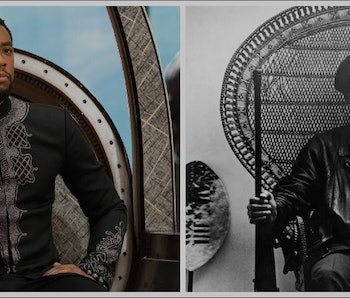 In 1966, the Black Panther Party begin fighting for the African American community in the United States, and the superhero Black Panther began fighting crime in the pages of Marvel comics. The timing and the similarity in the name could raise some questions. Was Stan Lee tapping into the group’s message and growing notoriety for his latest hero? Did Marvel’s first black superhero give the group its name? Neither is true, as it turns out. The fact that both Black Panthers arose at the same time with the same name is one of the wildest coincidences in comics history.

T’Challa, the Black Panther, made his first appearance in July 1966 as Lee and Jack Kirby’s Fantastic Four #52. The Black Panther Party, meanwhile, formed in October of that year. Marvel’s Black Panther almost had a different superhero moniker, as during his creation Kirby considered naming him The Coal Tiger instead, though the pair ultimately went with Black Panther.

The real-life Black Panthers originated in Oakland, California, (a city that featured prominently in the new Black Panther movie as a nod to the IRL group) later that same year. Founders Huey P. Newton and Bobby Seale named the organization, originally called the Black Panther Party for Self-Defense, after the big cats because black panthers don’t attack first, but strike as a result of an aggressor’s actions, according to Newton. Initially, the group aimed to keep African American communities safe from acts of police brutality by patrolling neighborhoods and observing the police while legally carrying guns of their own, but the Panthers grew both in size and scope. The Panthers were very vocal when speaking truth to power, which put them both in the spotlight and at odds with the United States government, which deemed the Panthers to be a communist organization and enemy of the U.S. government. They peaked in the 1960s with over 2,000 members and chapters in many American cities before dissolving 1982, but it left behind a significant legacy.

Concerned about a perceived connection between Black Panther and the Panthers, Marvel briefly changed T’Challa’s superhero name to Black Leopard in 1972’s Fantastic Four #119. Roy Thomas, who wrote the comic issue for Marvel, told The Ringer “Since the debut of Marvel’s Black Panther had coincided, roughly, with the rise of the Black Panther Party, that had made Stan [Lee] and Marvel concerned that we’d become identified with that group … But Stan soon thought better of it, and I don’t think the Black Leopard ever appeared as such in many stories.” The following year the character’s name reverted to Black Panther, and he even got a series of his own, for the first time.

Black Panther’s status as the first black Marvel hero makes the character’s existence a historical moment. People being able to see themselves in media is important and Black Panther was the first in a line of black heroes who had adventures that comic book lovers could read about. Characters like Luke Cage followed T’Challa and made their way to many corners of the Marvel Universe.

Wakanda itself is a revolutionary concept because of how it relates to history as we know it. While Africans were brought to the United States as slaves, Wakanda is a technologically advanced African nation that avoided colonialization and was able to thrive. Wakanda, albeit a fictional nation, is a place where black people were able to excel when left alone. The juxtaposition of that story and America’s history make it an important, and revolutionary, land that lives in the comics. In many ways, the country embodies the self-sufficiency and black excellence the Black Panther Party believed in and fought for.

All these years, Black Panther is once again at the center of a movement, only this time, it’s the hero rather than the organization. Black Panther may have opened the door for other heroes of color in the pages of comic books, but that has not translated to diversity on the big screen. All communities are not represented equally in media, especially film, and this Marvel hero is coming to movie theaters at the perfect time because the conversation has become extremely prevalent in the current conversations within the entertainment industry.

Black Panther brings the Wakandan hero to the big screen with a majority black cast and crew. It is a well-funded and promoted blockbuster superhero film about a group of black people. All of these years later the character is at it again.

Black Panther is now in theaters.