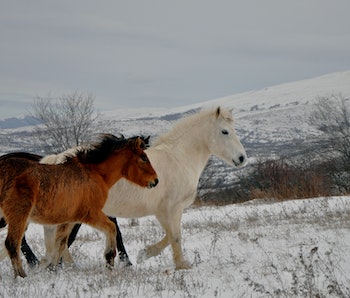 Lots of animals are evolutionary amputees. No, that doesn’t mean they got limbs cut off by a doctor — it’s that they slowly lost certain limbs over time because of evolutionary pressure. Whales’ ancient ancestors had hooves, and snakes’ ancestors had legs, and since losing their appendages, these animals have gotten around just fine on their flippers and bellies for millions of years. Similarly, ancient horse ancestors once had just as many toes as we do — five, for most of us — but gradually lost them over time, until they ended up with just one big toe on each foot.

Or at least that’s what scientists thought until now.

In a paper published Wednesday in the journal Royal Society Open Science, a team of researchers led by Nikos Solounias, Ph.D., reports that the domestic horse (Equus caballus) actually still has remnants of its four ancestral toes. By examining modern horse bones, bones from extinct horse ancestors, and modern horse fetuses, the researchers re-identified small regions of the horse’s forelegs as small remnants of its ancestors’ toes.

But if the evidence is all there, why had nobody seen it before?

“The most obvious reason is it’s in plain sight, they just didn’t see it. Many times this happens in our lives. We can’t check everything that people say to us,” Solounias, a professor of evolutionary biology at New York Institute of Technology, tells Inverse.

“A lot of times we just follow what is told to us. Sometimes something can slip by being wrong for a very long time,” he says. “I don’t think I would make fun of people for that, you just have to be fortunate enough to observe something and say, ‘Wait a minute, why is this so?’”

That “something” he observed was sets of ridges on the forelimbs of the modern Equus and the extinct three-toed horse Mesohippus. Conventional scientific wisdom says that the modern horse’s one remaining toe (toe number III) is flanked by the vestigial remnants of toes II and IV that only go part way down the foot. These two vestigial bones, Solounias and his colleagues argue, include the ancestral remains of toes I and V. Part of the evidence to support this claim is the Mesohippus forelimb, which has these ridges too.

In August 2017, Inverse reported on a paper that outlined the selective pressures that led to horses only having one toe. That paper’s first author, Harvard Ph.D. candidate Brianna McHorse, tells Inverse that this new research is based on solid skeletal evidence.

“It certainly changes how we conceive of horse limbs if all five digits are present as they suggest,” says McHorse. “That said, I don’t think it necessarily changes the overall message — whether the digits are entirely developmentally eliminated or remain as tiny vestigial structures, it’s still the case that all digits other than the center one ‘go away’, so to speak, structurally.”

For someone who’s upending conventional wisdom, Solounias is remarkably casual about it. When asked how this new research changes what researchers like McHorse have found, he agrees that the evolutionary forces behind the changes in horse’s legs were probably just as McHorse and others describe, regardless of how many toes the modern horse has now.

“She studied the forces and the weight, so all this is okay. It doesn’t contradict anything I say” Solounias says. He does point out that McHorse’s mention of horses being monodactyl — single-fingered — is no longer considered correct in light of his research, but that’s okay. “I don’t think that’s a big deal. She was doing a totally different perspective.”

Differing perspectives aside, horse toe evolution represents a strange case in which evolution seems to move forward and backward at the same time. You see, as selective pressure made the leg more efficient and better able to carry the large animal’s weight, the adult horse’s leg actually became an awful lot like an embryonic horse’s. In short, the adult horse’s leg is like if a five-toed animal’s toes simply stopped developing.

“Think of it as a tulip bud that doesn’t open,” says Solounias. “The information is still there, but compressed.”

This story may sound like a big deal, as it totally changes the way we understand horse evolution. To a certain degree, that’s true. But it’s also an example of the way science is supposed to work: New information replaces old information as we gather new evidence. In fact, Solounias says he had done much of the research for this project 20 years ago, but simply ran out of energy. He credits his student Melinda Danowitz, the second author on the paper, with helping him finally get the study ready for publication. “She was very gung-ho, and she helped me put everything together,” he recalls. “She said ‘We can save this.’”

So now that the study is out, it looks like an awful lot of anatomy and evolutionary biology textbooks will need to be rewritten. True to form, though, Solounias is chill about it.

“I’m not going to police people. They can do whatever they want.”

Abstract: We revisit digit reduction in the horse and propose that all five digits are partially present in the modern adult forelimb. Osteological descriptions of selected tetradactyl, tridactyl and monodactyl equids demonstrate the evolution of the forelimb. Histological, osteological and palaeontological evidence suggest that the Equus distal forelimb is more complex than traditionally conceived. The current understanding is that the horse distal forelimb consists of one complete digit (III) and two reduced splint metacarpals (II and IV). Metacarpals II and IV each exhibit a ventral ridge, which we suggest represents the undifferentiated digits I and V. These ridges are present in the tridactyl Mesohippus, but are absent in the tetradactyl Hyracotherium. The carpal articulations of the five metacarpals match those of pentadactyl taxa. Distally, the frog, a V-shaped structure on the ventral hoof represents digits II and IV, and the wings and hoof cartilages of the distal phalanx are digits I and V. We relate this revised interpretation of the Equus forelimb to Laetoli footprints, and suggest the Hipparion side impressions are created from the hooves of I and V, rather than from II and IV. We show shades of pentadactyly within the Equus manus.