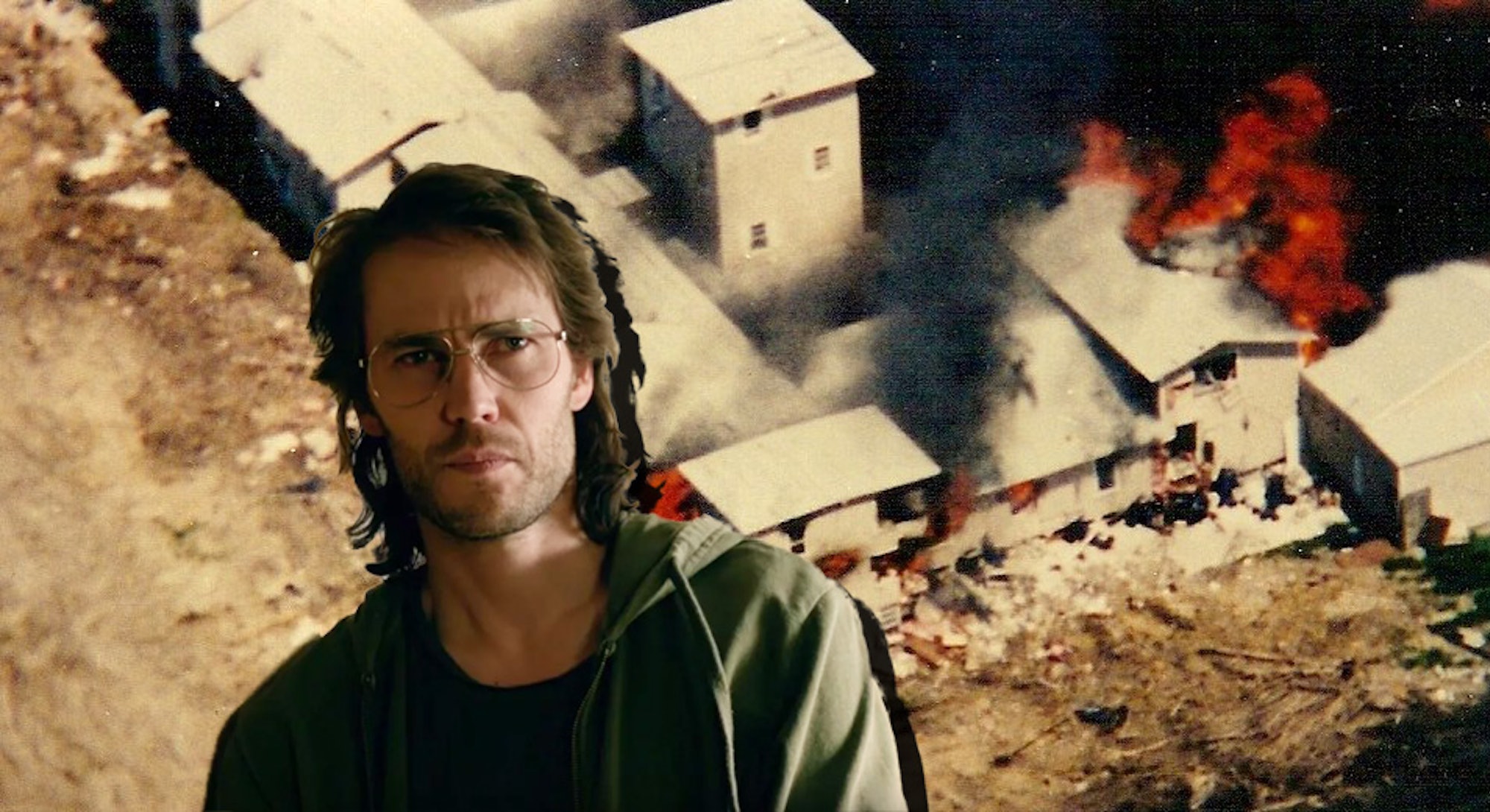 When Mount Carmel Center, a large complex in sun-beaten rural Texas, burned to the ground and killed 76 members of a religious cult who had spent the past two months facing off with the federal government, the whole world watched. It was 1993, right as 24-hour cable news was becoming ubiquitous, just after the rating success of the first Gulf War. To hear the FBI tell it — and they were the ones telling it — the Branch Davidians were dangerous, and had followed their charismatic leader David Koresh’s orders to set the building ablaze, fulfilling an apocalyptic death wish. Vague memories of that side of the story, along with the unforgettable images of tanks surrounding compound’s smoldering wreckage, are the enduring memories of the Waco Siege some 25 years later.

Television seems poised to change the culture’s collective memory of the Waco Siege. It wouldn’t be the first time.

The creators of Waco, a new six-part miniseries airing on the Paramount Network, had the same general idea about what went down before they started working on the show.

“We never really made much of a distinction between the Branch Davidians and Heaven’s Gate and Jonestown,” Drew Dowdle tells Inverse, referring to two cults whose members committed ritualistic suicide (one group wore identical tracksuits and Nikes, the other drank poisoned Flavor Aid). “We realized how different they were from our misperception of that. That’s what really got us beginning to pull this thread to retell or correct the history books.”

Drew and brother John Erik Dowdle didn’t always set out to do some revisionist history about one of the most infamous stories of the Nineties. Originally, the pair were working on an unrelated script, and discussed making their bad guy a survivor of the Waco disaster.

“Maybe that would’ve lead someone to being all messed-up and humanize the bad guy,” John Erik recalls. However, when they started reading an account of the events by David Thibodeau, one of only nine Waco survivors, they realized they only knew one side of the story. The opportunity to tell the Waco story from the Branch Davidians’ perspective, not just the one people remember on the outside, was compelling.

Instead, John Erik explains that they “wanted to try to spend as much time with the people we consider the heroes of this situation. The people who tried to reach out to the other side, and see things from the other point of view.” Because of this, we don’t get to the Koresh’s power struggle with his predecessor to become the leader of the extremist religious sect. We don’t see Koresh change his birth name from Vernon Howell to the one that would better reflect his messianic role in the Branch Davidian, which was so named for the group’s belief that the Biblical David’s Kingdom in Israel would be restored. Nor do we see how he became a polygamist and alleged statutory rapist and child abuser. The Waco Tribune called him a “sinful messiah.” Koresh was not a great guy, and Waco is being criticized for painting the movement’s leader with too kind a brush.

But, contrast the admittedly problematic aspects of sympathetic portrayal to what people said about Koresh at the time, and remember that more than 70 people died alongside him. Waco’s focus is less on Koresh’s crimes than the larger idea that the who whole episode made victims out of everybody involved. For better or worse, the series is showing audiences a tragic situation rather than a bad guy.

“The FBI controlled the entire media narrative,” Drew says. “The people inside were not given a voice at all. We were told who they were, we were told that they got what they deserved, and that ultimately they were intent on killing themselves. The FBI tried but was just not able to stop it. I think a lot of people believe that.”

Instead, Waco tries not to demonize Koresh or his followers, or even law enforcement, though it does place most of the blame for the bloodshed at the feet of the ATF and FBI, painting its work as sloppy. The series does what news cameras — or non-existent iPhones — couldn’t in 1993, and goes inside the walls of Mount Carmel Center to show us the people inside.

“Just by way of telling the Branch Davidian side of the story, I think you automatically have a lot more sympathy than you might’ve had,” Drew says.

Waco is the latest in a series of prestigious limited series about major news and true crime events from the 1990s, American Crime Story: The People v. O. J. Simpson being chief among them, but it’s not alone. Season 2 of that show, focusing on the assassination of Gianni Versace, is currently airing on FX; a true crime Law and Order tackled the Menendez Murders; there was a Discovery docudrama about the Unabomber; USA is going to dramatize Biggie and Tupac’s deaths in late February. Not to mention I, Tonya, the 2017 film recounting the figure skater Tonya Harding’s 1994 scandal involving rival Nancy Kerrigan. It was recently nominated for three Academy Awards.

The questions of why Waco, and why now, become a little easier to answer when you talk to David Craig, a professor at the University of Southern California’s School for Communication, who previously worked on nearly 30 TV docudramas and movies during a career at A&E and Lifetime.

Like light-wash denim and Doc Martens, another Nineties staple, the docudrama, is again in vogue; Craig says the genre reigns supreme every other decade. The Fifties saw New York playwrights tackle serious issues for anthology series, but the genre faded when TV moved out to Los Angeles. Then in the Seventies, the made-for-TV movie or miniseries emerged as a counterpart to the rise of Hollywood blockbusters before burning out in the Eighties. When new cable channels needed to differentiate themselves in the Nineties they turned once again to docudrama events based on real news stories before seeing another decline as reality TV emerged the next decade.

“This is, in a sense, the fourth time that TV movies have come back to teach audiences the power of a docudrama,” Craig tells Inverse. This newest wave is perhaps the most prestigious, and it’s putting more distance between the adaptations and the events themselves. Craig notes that there was a made for TV movie about Waco that came out within a year of the actual event, and though it offered some insights news reports lacked, it could only do so much.

“Time and distance gives us a little more prospective,” he says.

People v. O. J. wasn’t just about the trial, but about how race, class, gender, and policing operated in the Nineties, and what they mean today. These docudramas are a fiction — albeit carefully researched ones — but they’re fictions in service of a truth that’s trying to say something more and make viewers rethink their memories. The miniseries format also naturally lends itself to in-depth explorations of characters that might’ve been overlooked the first time. The Dowdles explain that they first tried to make Waco a feature film, but found they need the space afforded by a limited series to show the Branch Davidians’ complexities.

The Dowdles are aware that, for some young viewers with only faint memories of the real seige, Waco could be their first real exposure to the story. And even people who remember the omnipresent news coverage are getting a deeper look.

Waco, with its tragedy and sympathetic portrayal of Koresh, could change all that. Grainy cable news footage of a burning building might be replaced by Taylor Kitsch giving a sermon to people who believe in him.

“History goes to the victors, but also the storytellers,” Craig says. “There’s no doubt that some people’s understanding of history and these types of true crime events will completely be informed by the impressions that are made by these films. And that yields a tremendous amount of responsibility and power on the part of the producers and the networks to do a moral and ethical job.”

Waco airs on Wednesday nights at 10 p.m. Eastern on the Paramount Network.