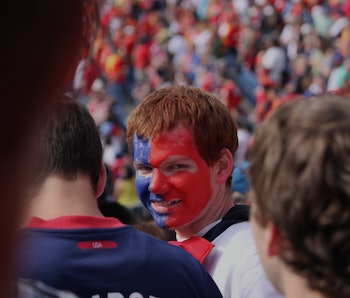 The New England Patriots are once again back in the AFC Championship Game for what feels like the hundredth time — and it’s not far off that. The Jacksonville Jaguars look to follow up last week’s monumental upset with another and keep their dream season going. A hive mind of about 50 NFL fans predicts the Patriots will win Sunday, along with plenty more details about how the game will pan out.

The Patriots stomped the Tennessee Titans 35-14 last week in the divisional round. Once again playing at home in Gillette Stadium, the Patriots are in good shape to make the Super Bowl for the eighth time since 2001 and repeat as champions for the first time since 2004. But the Jaguars have a fearsome defense and, when needed, a high-scoring offense — which was very much needed in last week’s wild 45-42 victory over the Pittsburgh Steelers. And while we called that a monumental upset, maybe we shouldn’t: After all, it was the second time this year the Jaguars beat the Steelers, and the team has shown some real fearlessness in taking the best the AFC has to offer. At a certain point, maybe the Jaguars really are part of that best. Sunday will tell the story.

The swarm predicts the Patriots will win with high confidence and 76 percent brainpower behind the pick.

The hive mind likes the Patriots to win by seven to nine points, with 80 percent brainpower behind the prediction.

While the Jaguars have a league-best defense and the Patriots very much don’t, the hive mind figures the New England offense will make up the gap, predicting the Patriots defense will give up fewer yards with lower confidence and 72 percent brainpower.

The hive mind doesn’t see much chance of the Jaguars winning or even competing in a defensive battle, giving only a 20 to 40 percent chance they can hold the Patriots below 25 points. There’s 86 percent brainpower behind the pick.

And if you want to get really exact about that last prediction, the swarm gives a precisely 25.6 percent chance the Jaguars can keep the Patriots below 25 points, with 91 percent brainpower.