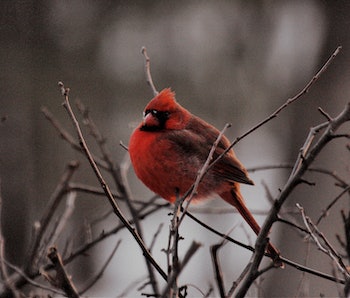 Ever since computer scientist Alan Turing first proposed his famous test of machine intelligence in 1950, the question of what it means for a computer to think has revolved around one basic question: Can it imitate a human’s own thinking so closely that nobody can tell the difference?

At first glance, the imitation going on with the latest A.I. creation from Microsoft’s Deep Learning Technology Center is of cameras, not the human mind. The bot works to create photorealistic images — in this case, mostly of birds — using nothing but text descriptions and a huge repository of similar photographs to draw on. The bird pictured up top is real. The one below is not.

Since we spoiled the surprise and told you upfront that bird is simulated, you might notice little signs of blurriness in the feathers or the surrounding branches that you feel are a dead giveaway the bird isn’t real. Either way though, the bird is shockingly close to the real thing, and the A.I. started with the simplest of directives from the researchers: Create a bird that is red and white with a very short beak.

But note all the things the A.I. wasn’t told to do. There was no specific directive on where the bird should be in space, for instance. A particularly blockheaded computer might just place a stationary bird against a background that looks vaguely like the sky. This A.I., however, elected to place the bird on a branch despite not being told to. It demonstrated artificial imagination, the computer equivalent of what we think of as a uniquely human trait.

The ability to move beyond the instructions at all is a clear sign of artificial imagination, though it definitely still likes to generate images within what it believes to be realistic. The decision to place the bird on the branch, for instance, is a byproduct of the fact that many of the images in the data set show birds in that position instead of flying or, say, driving a car. Well, we assume there aren’t any photos of birds driving cars, but we live in hope.

To that end, the computer is considerably more literal-minded than humans can be, and it lacks our flair for the absurd. As a test of how far the team could push the A.I.’s burgeoning imagination, it was asked to generate an image of a double-decker bus floating on a lake. The best it could do was a fuzzy image of a decidedly boat-looking bus on top of a lake, as though it couldn’t really countenance so ridiculous an image.

The A.I. doesn’t always get all the visual details right, with the researchers noting mis-colored beaks and mutant-like bananas as examples of problems with its creations. But it’s the ability to imagine details beyond the original instructions that arguably speaks to something deeper and more fundamental about the attempt to bring humans and machines together into one larger intelligence.

After all, the Turing test isn’t about whether a machine answers questions correctly — it’s about whether it can answer just like a human would. Maybe the A.I. can’t imitate a camera perfectly, but then neither could you or I.