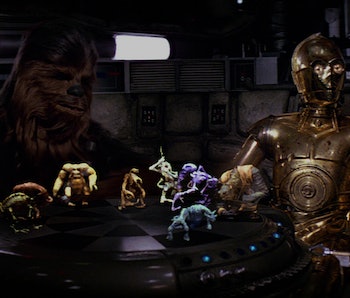 Fake games occupy a special place in fiction. They’re world-building devices to show off how chess in another universe — not unlike the universe itself — is familiar, but not overly so. Or they’re vehicles for poking fun at nerds and the things nerds love.

The Cones of Dunshire, for instance, was invented by Parks and Rec’s uberdork with fantastic hair Ben Wyatt. To create it, the show’s screenwriters contacted Mayfair Games, a real-life board game company, to produce a game that collided Settlers of Catan with Dungeons & Dragons. As Mayfair’s Alex Yeager told Nuvo, “I don’t think that there was a plan to produce an actual game, and whatever cohesiveness there was to the content was almost an afterthought.” The Cones of Dunshire, did, in fact, make the translation off the screen into the real world at 2014’s GenCon. By all accounts, it was an odd — but fun and almost playable — experience. These games make the Cones of Dunshire seem like a calm afternoon of Bridge by comparison. And we want to play them.

In one of the most famous examples of space chess, R2-D2 and Chewbacca face off in the back of the Millienium Falcon over a holographic board of monsters. The 3D game of Dejarik involves marshalling a horde of creatures — with the nonsensically perfect Star Wars names of Grimtassh the Molator and K’lor’slug — to victory. Chess has its Sicilan defense, but Dejarik has the kintan strider death gambit. Dejarik shines in true blood-pumping glory if you’re pitted against a Wookiee. That added element of getting your arm ripped off if you make a play that’s too good or sneaky? We’re hiking up the Everest of board games, and left our oxygen tanks at base camp.

If Magic: The Gathering’s rules seem too easy to master, then Adventure Time’s spoof Card Wars will set you straight. Like Magic, it’s played with cards — but these resolve into holographic characters when set on the table. The game’s logic lands just shy of making sense. If there’s an incoming Cerebral Bloodstorm about to wreck your Cool Dog? Just tap, er, Floop the Pig.

The It’s Always Sunny In Philadelphia quartet put their sociopathic heads together to create Chardee MacDennis, which Wikipedia describes as “a board game made up of every other board game.” That’s true in the sense that the cars in Mad Max: Fury Road are made up of other automobiles: It fails to capture the mayhem of three-story speakers, flaming guitars and and the highest concentration of decorative spikes this side of a Gwar concert. In the same ludicrous vein, Chardee MacDennis’ might require a player to take a thrown dart to the palm, chug liver-busting amounts of booze, eat raw cake ingredients, or answer the question, “Dennis is asshole. Why Charlie hate?” If you win, you get to stomp on your opponents’ pieces, which is a feature we’d like to see introduced in every Milton Bradley game.

Calvin and Hobbes’ favorite pastime Calvinball is. To paraphrase Hobbes, it is the most disorganized sport in the world. There are few actual rules, chief among which are 1) the game requires a ball 2) players need to wear masks and 3) it cannot be played the same way twice. In the spirit that whoever wins wins, it’s a spiritual successor to the sport of Brockian Ultra Cricket, which Douglas Adams introduces in A Hitchhiker’s Guide to the Galaxy. But Calvinball doesn’t force its participants to grow extra legs or hit other players with skis — when the score is Q to 12, the love of the game is the victor.