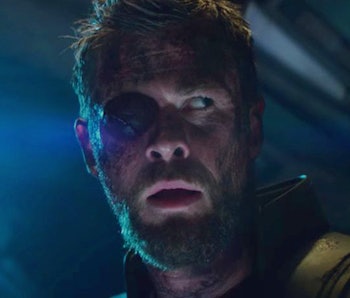 Thor fans couldn’t believe their eyes at the end of Thor: Ragnarok, when the evil Goddess of Death Hela scratched out one of Thor’s eyes. The now one-eyed god ended up sporting an eyepatch, much like his father Odin’s, and he’ll be rocking the cyclops look in the upcoming Avengers: Infinity War. However, Chris Hemsworth, who plays the God of Thunder, recently revealed that he never ~technically~ wore an eyepatch.

While speaking with CinemaBlend ahead of the release of this new war movie, 12 Strong, Hemsworth said that he thought Thor losing his eye was “cool” and “interesting,” but wearing an actual eyepatch was a pain in the ass.

“Then the day that we put the eyepatch on I was like, ‘This is ridiculous.’ The thing kept falling off, and we didn’t have the thing,” Hemsworth said, referring to the missing eyepatch strap. “

“So it became a CG eyepatch, which I was stoked about,” he continued. “But I’m happy with that trade [for the wig]. It has its downsides. But the upside is that it’s an hour less in hair and makeup without the wig on.”

Unlike a traditional pirate eyepatch, Asgardians favor a patch that doesn’t have any straps, and instead just covers the socket like an ornate, opaque monocle. Think Mr. Monopoly, if he were a space-Viking. It’s a neat look, but one imagines that it might not stay on that well if the wearer is doing superhero stunts on set.

Thor will only have one eye in Infinity War — or at least it seems like he’ll start out with only one eye, since there are photographs of Thor with two eyes and a light scar, suggesting he might gain it back. In any case, it looks like he loses the swanky eyepatch at some point, given that we’ve seen shots of just the dark socket in the trailers. However, Hemsworth confirmed that Thor will wear the patch in the movie, even if the actor physically won’t.

Avengers: Infinity War opens on May 4.