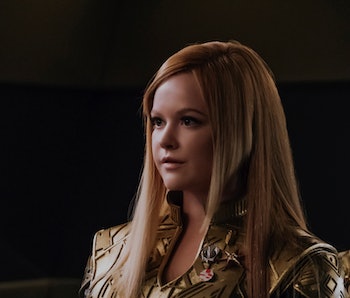 Among the plethora of WTF moments in Episode 10 of Star Trek: Discovery, one new mystery stands out: Who is the “faceless Emperor” controlling the Terran Empire of the Mirror Universe? Will it end up being a familiar character? Discovery’s showrunners, Aaron Harberts and Gretchen J. Berg, have confirmed we will definitely see the face of this person in a future episode.

Mild spoilers ahead for Star Trek: Discovery Episode 10, “Despite Yourself.”

In a phone interview just before the new episode aired, Gretchen J. Berg and Aaron Harberts gleefully told Inverse that the Mirror Universe Emperor is something we’ll find out more about in the rest of Discovery’s first season.

“Oh my gosh. I can’t wait to meet the Emperor!” Harberts said.

“Who is in charge of this craziness?” Berg said. Harberts then doubled-down saying, “I think we need to know who’s calling the shots in this crazy place called the Mirror Universe.”

So that’s a pretty huge confirmation. The secret identity of whoever is running the Mirror Universe’s evil xenophobic human Empire will be revealed. But who will it be?

In terms of the Mirror Universe’s chronology, “Despite Yourself” takes place about 100 years after the Enterprise two-part episode “In a Mirror, Darkly.” At the very end of that episode, the Mirror Hoshi Sato declares herself Empress of the Terran Empire after betraying the Mirror Jonathan Archer. Because Discovery takes place 100 years after these events, it’s unlikely Empress Sato is still in charge of the Terran Empire, though a non-canon Trek book called Glass Empires claimed she did have a dynasty that lasted for about 100 years.

After Sato, the only other Emperor we’re aware of in the Mirror Universe is … the Mirror Spock. You know, the one with the little goatee. After the prime universe Kirk encouraged Mirror Spock to reform the Empire in the original series episode “Mirror, Mirror,” Spock didn’t shave his beard, but he did make the Empire more peaceful. This actually ended up leaving Earth open to attack by an alliance of the Klingons and the Cardassians in the 24th century. In the Deep Space Nine episode “Crossover,” we learned that Spock’s peaceful reforms resulted in humans becoming slaves to this alliance.

But, all of that stuff with Spock and Deep Space Nine is in the future of where we’re at in this episode of Discovery. In the 22nd century, the Terran Empire incorporated some aliens, including Vulcans, into their structure. But, in Discovery’s “Despite Yourself,” the Terran Empire is human-only, with rebels (including Vulcans) fighting against them. How Spock fits into all of this remains to be seen. Presumably, he’s out there on the ISS Enterprise in some way, shape, or form, serving with the Mirror Christopher Pike. So, it seems unlikely Discovery would show us Mirror Spock before real Spock.

So, who is the Mirror Emperor? In “Despite Yourself,” Burnham is deeply disturbed by seeing Connor alive in this universe. Could the Emperor be someone else Burnham also watched die, like Captain Georgiou? Or, could the Emperor perhaps be someone else close to her, like maybe Sarek? If Spock exists in this Mirror Universe, then maybe his father is secretly in charge of the Terran Empire. It would be a little weird for a non-human to be running things, but it would also be a great twist. Berg and Harberts did not give any hints as to who the Emperor might be, but the fact that we will find out at some point is just the latest compelling wrinkle in Discovery’s arsenal of seemingly endless twists.